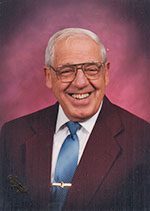 READING — Antonio John Ferraro, 96, passed away at the Daniel’s House in Reading on Monday April 6.

Antonio was born and raised in Malden and graduated from Malden High School, Class of 1936. He served his country with pride during World War II in the  Army Air Corps. Mr. Ferraro started working at the First National Grocery Stores at the age of 17 and continued to work well into his 70’s. He worked as a manager at the First National Store on Franklin St. in Melrose, East Boston and Derry, New Hampshire, before joining Star Market. He continued to work for Star Market in Saugus, Concord, Coolidge Corner in Boston and then in Waltham.

Mr. Ferraro was a resident of Melrose from 1949-2009. He lived in New Hampshire for a year and the past five years in Wilmington. While living in Melrose, he helped build the Melrose Church of Christ on Upham Street brick by brick. Antonio was a founding member of the church and was the treasurer for over 32 years. Mr. Ferraro enjoyed gardening, taking walks and was a coin collector.

Antonio was the beloved husband of 65 years to the late Norma F. (Aldridge) Ferraro. He was the devoted father of Toni L. White of St. Peters, Missouri; Vincent A. Ferraro and his wife Priscilla Mandrachia of South Hadley; and James P. Ferraro and his wife Ann of Wilmington. He was the loving brother of the late Louise Basso, Mary Petrino, Eugene and Joseph Ferraro. He is also survived by six grandchildren, three great grandchildren and many nieces, nephews, cousins and friends.

Visitation will be held at the Gately Funeral Home, 79 W. Foster St. Melrose on Saturday, April 11, from 9:30-11 a.m., followed by a service at 11 a.m. Relatives and friends are invited to attend. Burial in Wyoming Cemetery in Melrose will be private. In lieu of flowers memorial contributions may be made in Antonio’s memory to the American Heart Association,300 5th Avenue, Suite 6, Waltham, MA 02451-8750 or @ www.heart.org. To send a message of condolence please visit www.gatelyfh.com.