Boys’ lacrosse team gets the jump on Lexington

Warriors roll past Minutemen, are now 4-0 on the year 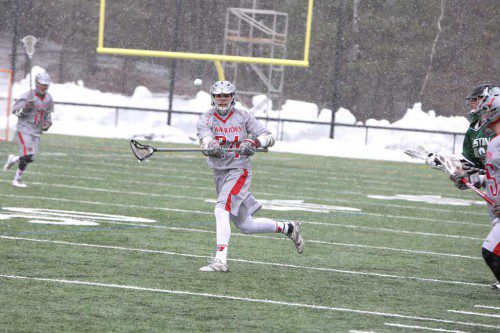 DYLAN BRADY, a senior defender, passes the up the field. Wakefield is 4-0 on the season with its latest victory, a 14-4 rout of Lexington yesterday afternoon at Landrigan Field. (Donna Larsson File Photo)

WAKEFIELD — The Wakefield Memorial High School varsity boys’ lacrosse team is off to one of its best starts to any season. It hasn’t just been the fact that the Warriors are winning games that has been impressive but the manner in which they’re winning them proves that the Warriors have come back even stronger after having one of their best seasons ever a year ago.

Wednesday afternoon in the dreary cold weather up on Landrigan Field, the Warriors notched a 10 goal win, 14-4, over Middlesex League rival Lexington to improve to 4-0 under first year head coach Andrew Lavalle.

“There are very few guys I’ve been around that like competing as much as these guys, it’s a really good culture to be around,” Head Coach Lavalle said of his team following the program’s first victory against Lexington.

Wakefield’s MO has been controlling games by maintaining possession of the ball and scoring lots of goals. The key factor in this game was Wakefield getting off to a good start.

“Lacrosse is a game of runs,” Coach Lavalle said after the game. “We went on a great run in the first quarter. We just attacked and that’s the name of our game, lots of shots lots of goals. We got out there and we wanted to play and we wanted to run our game, it was good to do so.

“In the second quarter it seemed like our offense was clicking. We had a really strong first half,” added Lavalle. “We were prepared that’s the big thing, we really got a good look at Lexington before and we’re focused on fundamentals.”

Everything starts at the center X with a face-off in lacrosse and the Warriors often obtain their edge by beating the other team to the ball from the starting whistle.

So far this year, Wakefield’s center James McAuliffe has been phenomenal at face-offs, winning a staggering percentage of draws and establishing himself as the catalyst for what has become an extremely potent attack.

“We had the ball most of the time,” the coach said. “We were able to win face-offs. J-Mac on the face-offs won a good percentage of them.”

“We were able to control the ball and had guys that were really able to do what they wanted to do with the ball,” said Lavalle.

The reason Wakefield is able to dominate is simple, it has too many players that can score. The opposing defense can’t cover all of them. Wednesday, Wakefield had seven different players get their name in the goal column.

Wakefield’s top scorer so far this year, MJ Urbano, had another magnificent game for the Warriors. He continued his torrid goal scoring run where he is averaging better than four goals per game through the first four games of the year. Against Lexington he beat the opposing goalie five more times including two in the first quarter, bringing his tally to 17 after four games.

“He went crazy,” Coach Lavalle said of his hot shooting middie. “He was pumping goals in. He was just unstoppable today. Every time he got the ball he was going to the cage. When we get MJ going, when he does that, it opens up so much other stuff for us.”

Pat Leary is another player who is off to a strong start in 2015 and against Lexington he continued to impress with four more goals.

“Leary had four goals, that’s our wing attackman,” Lavalle said. “He’s just a young guy stepping up, focusing on those fundamentals and pumping goals in.”

Bryan Noyes, James McAuliffe, Austin Collard, Vin Ferretti and Brandon Grinnell each scored a goal in the first half for the Warriors.

In the third quarter the teams actually tied 2-2 in goals but by the end of the third the score was 12-3. Wakefield outscored Lexington 2-1 in the fourth quarter finishing at 14-4.

Urbano and Leary had two goals each in the second half, accounting for the four goals scored by the Warriors after halftime.

The story of the second half was Wakefield’s ability to maintain control and hold on with a big lead.

“It just comes down to fundamentals and good lacrosse IQ,” said the coach when asked about playing with a big lead.

A large part of their ability to keep Lexington down was goalie Alex Flynn.

“He’s just a guy that isn’t scared,” Lavalle said of his senior goalie.

Lexington had some strong offensive players but the Minutemen were rendered ineffective as the defense couldn’t wrestle the ball away from the Warriors most of the time. When the few opportunities they had to attack came, the Minutemen put the Warrior defense and goal under a lot of pressure.

Had Flynn not been able to come up with a number of huge saves toward the end of the third and fourth quarters, the score at least would have been different.

“Flynn must have made four stops right at the end of the game,” the coach said.  “They were one-on-one stops, straight up. (They were) Tough stops to make and he just stepped right in front of them.”

There is no saying what might have been had Flynn allowed more than one goal per quarter, but it was evident to those in attendance what the outcome would be long before the final whistle sounded.

With the win the Warriors must move on and focus on their next opponent with another big game coming up on Friday when they welcome Reading to Landrigan at 4 p.m.

The coach has no doubt in his mind his team will be prepared for the next game saying, “Every time we step on the field we focus on passion, we have guys that want to win this game and guys that want to be successful. Reading is another tough one that Wakefield has a tough time with. We have to focus on preparation and being prepared for that game, as well as performing.”