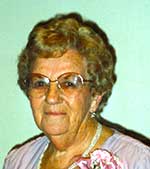 She was born in Stoneham on July 4, 1920 and was the daughter of the late Arthur and Edna (Van Vorst) Robinson. Ardis was well-known member of the community of Wakefield and an active member of St. Florence Church.

Her funeral will be held from the McDonald Funeral Home, 19 Yale Ave., Wakefield, Thursday at 10:30 a.m. followed by a funeral Mass in St. Florence Church, 47 Butler Ave., Wakefield at 11:30.

Interment will be at Lindenwood Cemetery in Stoneham.

Visitation for relatives and friends will be held at the funeral home on Wednesday from 4 p.m. to 8 p.m.