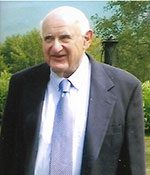 DANVERS — Arnold Levine of Danvers, beloved husband of Shirley Horovitz Levine, died at the Kaplan Family Hospice House in Danvers on Sept. 9. He was 82.
Mr. Levine was born in Wakefield in 1933, the son of the late Louis and Marion Levine.
He attended Lincoln School and graduated from Wakefield High School in 1951 where he was co-captain of the track team. He then graduated with a B.S. from Northeastern University in 1957. He received his master’s degree in Education from Suffolk University and then earned a doctorate in Education from University of Massachusetts.
He started his teaching career in North Reading, and then taught at Nichols College in Dudley. He also taught at Wakefield High School and later in Burlington, Mass., where he spent more than 20 years teaching math.
While in Burlington, he was vice principal of Marshall Symonds Middle School.
After retirement, he taught part-time at Middlesex Community College in Lowell.
In addition to his wife Shirley Horovitz Levine, he leaves his children, Nancy McGurk, Linda Kaplan and her husband Stephen; his grandchildren: Mae-Lou Zaleski, Leah Kaplan and Brian Zaleski and his wife Kamaldip; and a great grandchild, Madalynn Zaleski. He also leaves his brother Bob Levine and his wife Beverly; his sister-in-law Lillian Levine and his brother-in-law and sister-in-law, Israel and Gillian Horovitz. He also leaves many nieces and nephews. He was predeceased by his brothers Melvin Levine and Elden Levine and his wife Joanne.
Mr. Levine will be buried at B’Nai Brith Cemetery in Peabody.