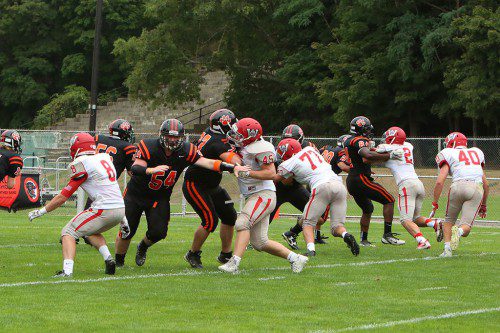 BEVERLY — The Beverly High football team had a new look with a new head coach, new offense and played at its newly renovated stadium.

But the Warriors found the Panthers to be the same strong team as ever as they were blanked by a 24-0 score on Saturday afternoon in the season opener.

Wakefield lost to Beverly for the second straight season as it was defeated 34-6 last year at Landrigan Field in non-league play.

From the opening kickoff, when the kick traveled just 16 yards, until an interception on Wakefield’s final possession, the Warriors made way too many mistakes to beat a team that went 8-3 last season and which returned many veterans.

“We killed ourselves on special special teams,” said Coach Steve Cummings. “We didn’t execute. The opening kickoff was supposed to go down the left side downfield, but instead we gave up field position. We weren’t going for an onsides kick. Then instead of fourth and eight from deep in our territory they would’ve been further back and probably punted.

“We also had some untimely penalties on offense,” added Cummings. “This was a tough one to open up with. Beverly is a well coached team.”

The Panthers outgained Wakefield in total offense with 257 yards to 90. The Panthers rushed for 173 yards and threw for 84. The Warriors had just 29 net rushing yards and 61 through the air.

Senior QB Kevin Morency completed eight of 14 passes for 84 yards and a touchdown and one interception as he was efficient.

Meanwhile, the Warriors started sophomore QB Mike Lucey who completed seven out of 11 passes for 61 yards. He also threw two interceptions, but those came late in the game with Wakefield forcing the play being down 17 and 24 points in the final quarter.

“He’s a sophomore, but I wanted him to be aggressive,” said Cummings.

The story of the game, especially in the first half, was that the Panthers held onto the ball for the majority of time. The Warriors ran just 19 offensively plays in the first two quarters while Beverly ran 29 and dominated in time of possession as well. The score was 17-0 at halftime.

Beverly began the game with the ball at its own 44 after the short kick. The Panthers needed 13 plays to get into the end zone.

On the very first play, Morency was sacked for a 14 yard loss by senior PJ Iannuzzi (10 tackles) and nearly lost the football which was fumbled out of bounds. But on the very next play, Chouinard ripped off a 30 yard run for a first down at the Warrior 40.

Chouinard had a run of four yards, Sam Abate gained three yards, and Flaherty forged ahead for two setting up a fourth down and one from the 31. Senior Hugh Calice picked up three tough yards and a first down.

After an incompletion, Chouinard had rushes for three and four yards. After a false start penalty, Beverly had another fourth down situation with a fourth and eight from the Warrior 26. A holding penalty on Wakeield gave the Panthers another first down.

Chouinard got two yards and a yard. Then Morency found WR Pat Gavin with a 12 yard pass setting up a first down and goal from the one. Morency found Flaherty with a one yard TD pass for the first points of the game with 3:21 left in the first quarter.

Luke Samperi added the extra point to give the Panthers a 7-0 lead.

Wakefield went three and out and punted the ball back to Beverly. Pat Leary got off a 45 yard kick, but the ball went right to one of Beverly’s best players, Abate, who returned the punt 30 yards to midfield.

Abate lost a yard on first down and Flaherty caught a 13 yard pass on the final play of the first quarter. Morency lost two yards on a QB keeper, but then found Chouinard on a 30 yard fade route down the field to set up a first and goal from the Wakefield 10. Calice then took the ball into the end zone from 10 yards out.

Samperi added the extra point to give Beverly a 14-0 lead with 9:41 left in the half.

Wakefield picked up its initial first down on its second possession and that came from a pass interference call on a third down and 14 play which brought the ball out to 35. Senior Alex McKenna gained five yards and senior RB Will Shea ran four eight yards and first down. Iannuzzi, a senior fullback, gained a yard and senior RB Joe Marinaccio (22 yards on seven carries and eight tackles on defense) ran for three yards. But on third down a Lucey pass fell incomplete the Warriors punted the ball away as Beverly took over at its own eight yard line.

Chouinard ripped off a 27 yard run. But two plays later Morency was intercepted by Leary as the Warriors took over at the Beverly 46 yard line.

Iannuzzi had gain of six yards and Lucey completed a six yard pass to Marinaccio for a first down. Marinaccio then gained two yards. Lucey had an incompletion which set up a third down and eight from the Panther 32. But the sophomore QB was sacked for a 14 yard loss by Gavin as the Warriors were forced to punt.

But the snap went over Leary’s head. The senior recovered the loose ball, but with a Beverly player closing in, opted to try a pass to a receiver which fell incomplete as Beverly took over at its down 46 with 2:00 left in the second quarter.

Morency completed a pass of 19 yards to Chris Cole. After an incompletion, Chouinard and Flaherty gained of 12 yards and four yards to bring the ball down to the Wakefield 19. But a 15 yard penalty on the Panthers pushed the ball back to the 34. Abate then had run of three yards and Morency gained seven on a keeper which set up a fourth down at the Wakefield 24.

Samperi came in and kicked a 41 yard field goal with nine seconds left to give the Panthers a 17-0 lead at halftime.

The Warriors got the ball to start the third quarter and sustained a drive as they picked up three first downs.

Starting at the Wakefield 28, Marinaccio had back-to-back runs of five yards After an incompletion and no gain by McKenna, Lucey threw a six yard pass to Carmen Sorrentino setting up a fourth down and four from the 50. That’s when Lucey found McKenna with a six yard pass for a first down.

Junior RB Ryan Fitzpatrick caught a 15 yard pass for another first down to the Panther 35. But after an incompletion on first down, an chop block penalty on Wakefield pushed the ball back 15 yards. Wakefield was unable to overcome the long yardage situation even though junior Alex Joly caught a seven yard pass and Lucey gained nine yards as it turned the ball over on downs.

Beverly should have been three and out, but a 15 yard penalty on Wakefield on the punt gave the Panthers a first down. But Wakefield’s defense held despite the infraction and Beverly punted the ball away on the first play of the fourth quarter.

The Warriors didn’t pick up a first down and Leary got a good roll on the punt which went 65 yards as Beverly took over at its own 18. The Panthers picked up two first downs before punting the ball away from their own 42.

McKenna caught a 17 yard pass, but then Lucey was sacked by Gavin and Clark Marchand for a four yard loss. Wakefield was unable to move the chains as it punted.

Beverly’s next possession resulted in a punt as the Warriors took over at their own 38 with 3:29 left in the game. On the second play, Lucey’s pass down the right side was picked off by Abate and returned 30 yards to the Wakefield 24.

Beverly needed just two plays to get into the end zone for its final TD of the game. Flaherty gained 23 yards and then took the ball in from a yard out. Samperi added the PAT to make the score 24-0 with 2:03 left.

Lucey was intercepted by DB Nick Berry on Wakefield’s final offensive play of the contest and the ball returned 21 yards as the Panthers took over and ran out the clock.

“I thought my defense played pretty well. We made them earn everything,” said Cummings. “They got us on that second and 24 and then the corner was in good position on the fade, but it was a perfectly executed play by them. They made the plays and executed and that was the big difference.”