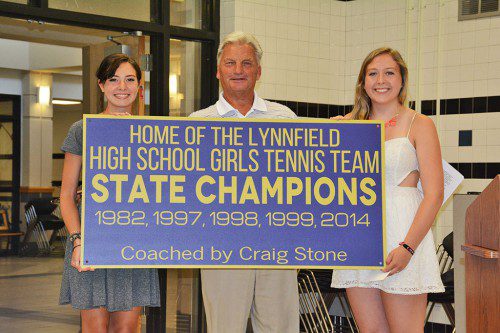 GIRLS’ TENNIS CAPTAINS Izzy Figucia (left) and Kelley Nevils proudly present a new sign to head coach Craig Stone at the Pioneers’ end of the season banquet last week. The sign, which honors the State Championships the Pioneers won under Stone in 1982, 1997, 1998, 1999 and 2014, will be hung at the Lynnfield High School tennis courts once the courts get redone. (Jane Skelley Photo)

LYNNFIELD — The girls’ tennis team celebrated its impressive season during the Pioneers’ end of the season banquet last week.

Lynnfield’s graduating seniors concluded their high school careers with a 65-11 overall record from the past four years. The seniors also served as catalysts for the 2014 Division 3 state champion Pioneers.

Head coach Craig Stone presented special team awards to eight Pioneers during the banquet. Captain Kelley Nevils received the Contributed Most Award. She also received the Lynnfield Athletic Association (LAA) Scholar-Athlete Award, which is awarded to the student-athlete with the highest grade point average (GPA). Captain Izzy Figucia was the recipient of the Coaches’ Award.

Rachel Maglio received the Unsung Heroine Award. Sophomore Sarah Mezini was the recipient of the Outstanding Achievement Award and was also honored for being named CAL Player of the Year.

In addition to Mezini, Stone and the Pioneers honored Kelley Nevils, Figucia, Katie Nevils and Skelley at the banquet for being named CAL All-Stars this spring.

Skelley and Stelman were elected captains for the 2016 Pioneers, who are returning a strong nucleus from this season. The team also presented Stone a sign that will be hung on the new tennis courts after they get renovated. The sign pays tribute to the state championships the locals won under Stone’s direction in 1982, 1997, 1998, 1999 and 2014.

“We will be waiting for the new courts to be done,” Stone told the Villager in an e-mail. “(Contractors) will probably have to remove the old fence to do the courts, so we wanted to wait and make sure the sign did not get damaged. I was told that construction should be taking place at the end of the summer or early fall.”