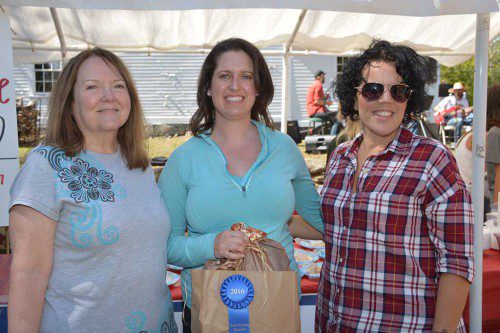 NORTH READING – The only thing missing from this year’s 22nd annual Apple Festival on Saturday was the cool, crisp weather normally associated with fall. Instead, warm and sunny, summer-like conditions only added to the enjoyment and the fun, bringing hundreds of visitors to the grounds of the Putnam House for the food, fun, entertainment and the ever-growing number of historical exhibits, all concentrated on the grounds of the Daniel Putnam House.

Throughout the afternoon, in addition to the fun of pony rides, arts and crafts exhibits, hot dogs and hamburgers fresh off the grille, festival goers of all ages had a chance to explore the historical buildings on the Bow Street grounds, including this year’s latest addition and new star of the show: North Reading’s original First Meeting House, Circa 1717, lovingly rebuilt and explained by the North Reading Minitmen.

The First Meeting House joined the Historical Society’s other buildings on the property in welcoming visitors on Saturday: the Farm Museum, which showcases a wide selection of equipment from North Reading’s agricultural heritage from the 1800s to after World War II; The 1680 Sgt. George Flint House, the 1845 West Village School House, the Putnam House itself and the Damon Tavern next door, all of which were open for tours.

At the First Meeting House, visitors stood in the recreated building that originally stood on the town common as was used for town meetings starting in 1717. At some point the building was disassembled and moved to Chestnut Street where it stood for many years, where it was rediscovered in December of 2014, taken apart by the Minitmen and rebuilt in August in time for the Apple Festival.

Inside the building were construction artifacts from 300 years ago as well as exhibits explaining how the original logs were cut colonial craftsmen and fashioned into the beams, posts and rafters of this very simple but functional building.

But it’s known as the Apple Festival for a reason and at noon came the highly-anticipated announcement of the winners of the annual Apple Pie Baking Contest selected by this year’s trio of judges: Nick O’Brien, Arthur Gonsalves and Rudee Atlas, with delicious results.

In the youth division, the first place ribbon was won by Kayla Imbriano, Abby Wall and Kassie DeChristopher and Hugo Wiberg was the second place winner.

There were plenty of booths on the grounds as well, everything from the North Reading Community Chorale to the Friends of Harold Parker State Forest. The annual event is a major fundraiser for the North Reading Historical Society and has been attracting enthusiastic crowds for 22 years to this family-friendly event.

“Macintosh” oil painting went to Scott Stimson; Nadia Rawle’s “On the Bank of the Ipswich River” acrylic on canvas was won by Diana Jenkins and the coffee basket went to John Mastro.

But the biggest winners were the folks and the families who spend the day or just a few hours on the Putnam House grounds enjoying the balmy weather and small town atmosphere. To say people are already looking forward to the 23rd Apple Festival would be an understatement.