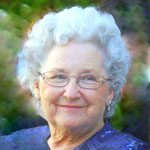 Barbara was born on February 7, 1932 in Princeton, Indiana, one of five children of the late Paul and Minnie (Brown) Thomas. Raised in Princeton, Indiana, Barbara met her future husband during band practice at Princeton High School. She caught his eye as the drum majorette while he was playing the trumpet. It was the beginning of 64 year marriage filled with love, devotion, and family.

After moving to Massachusetts, she and Denzel were married on September 8, 1950 and settled in Malden. She began working at Lewis Candy Factory in Malden until her first child was born in 1958. From 1958 until 1975, Barbara devoted herself to caring for her four beloved children. After her children had grown, Barbara returned to a working career at New England Memorial Hospital until her retirement in 1992. Second only to her family, was her love of her Silky Terrier “Randy.”

A creative person, Barbara was an avid seamstress, and made many coats and clothing for her children over the years. She loved music, especially singing and was a member of the choir of the Lt. Norman Prince Drum and Bugle Corps in Melrose. She sang throughout her life and had a love for all things Dolly Parton, even visiting Dollywood. She also loved drawing, history, maps and reading.

Barbara’s love of family extended to her family’s roots in Indiana and Arkansas. She returned almost every year with Denzel serving as driver and she as the navigator. They enjoyed many trips by car across the country together to see family. She also enjoyed cruising with her dear friend to Hawaii, Bermuda and throughout the Caribbean.

Barbara was a practical, organized woman who only focused on the positive, and always remained a proper lady. She committed herself to staying active throughout life and was forever proud of her grandchildren and great-grandchildren. Barbara was the secure foundation and source of love for her family and her strength and beauty will carry on in them.

Relatives and friends gathered in honor and remembrance of Barbara’s life during visiting hours at the Robinson Funeral Home, 809 Main St., Melrose on Thursday, September 25 from 4 p.m. to 8 p.m., and again on Friday morning where her funeral service will be celebrated at 10 a.m.

For online tribute or to share a memory, visit RobinsonFuneralHome.com