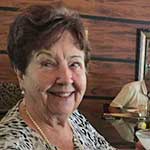 STONEHAM — Barbara J. (Hall) Dellasandro, 88, of Stoneham and formerly of Malden, passed away at Massachusetts General Hospital in Boston on Nov. 15.

Barbara was the loving mother of Mary E. Colarusso and her late husband James of Arlington, Va. and Susan Freedman and her husband Mark of Melrose. She is also the cherished grandmother of Matthew Freedman of Melrose and beloved companion of the late Charlie Blakley, formerly of Malden. She is also survived by many cousins, family members and friends.

Barbara was born and raised in Woburn before eventually moving to Chelsea where she graduated high school in 1946. She eventually moved to Everett where she raised her two wonderful daughters Mary and Susan.

Barbara lived in many different communities throughout her life including Woburn, Chelsea, Everett and Malden, before finally moving to Stoneham in 1986.

Barbara worked many different jobs throughout her life but most notably worked at the Malden District Court from which she retired in 1996. Since then she has been an active member of the First Baptist Church in Stoneham, an usher at the Stoneham Theater and the chair on the Board of Trustees at Brook Meadows Condominiums.

Barbara was an avid traveler and reader, as well as an excellent cook but she will be most remembered for her love and devotion to her family. Barbara was known by all to do anything for her daughters and to love nothing more than spending time with her grandson.

Visitation was held at the Gately Funeral Home, 79 West Foster St., Melrose on Saturday, Nov. 19, from 9 to 11 a.m., followed by a funeral service at the funeral home at 11 a.m. Burial at Forest Dale Cemetery in Malden.

In lieu of flowers memorial contributions may be made to St. Jude Children’s Research Hospital, 262 Danny Thomas Pl., Memphis TN 38105 or  www.stjude.org. To send a message of condolence please visit www.gatelyfh.com.