Warriors top Beverly and Watertown to go to 17-2 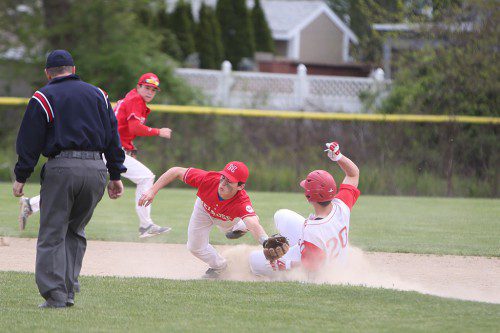 PAUL McGUNIGLE, a senior, had a hit in Wakefield’s 5-1 triumph over Beverly. The Warriors also beat Watertown on Friday as they are now 17-2 overall on the season. (Donna Larsson File Photo)

WAKEFIELD — Anyone that hasn’t seen the Wakefield Memorial High baseball team play this season might not know that the Warriors win with good pitching and defense, while coming up with some timely hitting and aggressive base running.

Of course those fans that have followed Wakefield all season long know that the Warriors play like that every game.

Wakefield increased its overall record to 17-2 with victories in its past two games. The Warriors topped Beverly, 5-1, yesterday afternoon in a non-league game after edging Watertown by a 1-0 score in the Middlesex League finale on Friday. Both games were at Walsh Field.

In yesterday’s non-league contest, senior right-hander Corey Imbriano wasn’t as sharp as he was last week in his no-hitter against Melrose. But Imbriano was still pretty darn good as he pitched five innings giving up one run on three hits while striking out eight and walking four. The senior earned the win to go to 5-0 on the season.

Adam Chanley, a senior, hurled the final two innings giving up one hit while striking out two and hitting a batter.

Meanwhile, the Warriors played perfect defense behind their pitchers.

At the plate, Wakefield had just six hits itself but it made them count with a pair of extra base hits back-to-back which led to three runs in one inning and two consecutive singles in a two-run fifth inning. Imbriano had two of those hits with one of them being a triple. Matt Mercurio and Andrew Auld, a senior, had a triple and a double. Seniors Paul McGunigle and Matt Smith had the other two hits for the Warriors.

“We played a good game,” said Coach Keith Forbes. “Corey had a few more walks than he would’ve liked. He’s tough and he battles. He went five innings with a high pitch count. He wasn’t at his best but he gave up just one run.

“We started off slow early in the game. I think we were tight early,” continued Forbes. “After the third, I gathered them and told them to relax. Their pitcher was throwing a good fastball so we talked about using the opposite field and going to the right-center field gap. Mercurio and Auld did that with a triple and a double which got us going. We had good at bats after that.”

Both teams had their leadoff hitter get on in the first inning. In the top of the frame, Matt Enos drew a walk but got no further as Imbriano retired the next three batters, two of which came on strikeouts. Imbriano tripled to left field to lead off the bottom of the first inning, but got no further as Beverly starter Kyle Cravatis retired the next three batters.

The Panthers scored their lone run in the top of the second inning. Sean Hanlon walked and stole second. With one out, Ricky Johnson blooped a single to right to put runners at the corners. After a strikeout, Garrett Desmond lined a base hit up the middle as Hanlon crossed the plate.

Will Shea, a junior, reached on an error at third base by Spencer Brown in the home half of the second. But Shea was thrown out trying to steal second which resulted in Wakefield getting no runs.

“We’re aggressive and we’re going to continue to run,” said Forbes. “This is high school baseball. Teams don’t always hold runners well and catchers have a hard time throwing them out. Until a team shows that they can hold runners and the catchers can throw runners out, we’re going to run. We’re going to make them make the plays.”

Beverly threatened in the third inning but Imbriano pitched out of a jam. Matt Collins walked and eventually was forced at second for the second out. With Nick Cotraro at first base on the fielder’s choice, Hanlon lined a two-out single to right field to put runners at the corners. But a fly ball to center field ended the inning.

Smith singled to right field to lead off the last of the third. But Beverly turned a 4-3 double play for two quick outs. Imbriano walked but a fly ball to deep left field by McGunigle resulted in the score remaining 1-0.

Wakefield broke through in the fourth inning with three runs to take a 3-1 lead.

Mercurio tripled to deep right-center field and Auld doubled to the same gap to score pinch-runner Kyle Grossi, a junior. Auld was running on a ground ball to shortstop for the first out of the inning. Shea laid down a bunt on the suicide squeeze, but the throw to the plate wasn’t in time as Auld scored. Shea then stole second and third. The junior scored on a sacrifice fly ball to left field by senior Tighe Beck.

Cravatis, a right-hander, went the first four innings for the Panthers giving up three runs on four hits while striking out two and walking one.

Kaelin Close took over in the fifth and went an inning and a third giving up two runs (one earned) on two hits. The righty walked one as well.

The Warriors added their final two runs in the fifth inning.

Tim Hurley, a junior, was awarded first base on catcher’s interference. Imbriano then ripped a base hit to left field. McGunigle laid down a bunt, and during a little bit of a miscommunication between the pitcher and catcher as to who was to field it, the Warrior senior beat out the play for a hit to load the bases. After a pop up to first base, Auld drew a bases loaded walk forcing in Hurley. Mike Guanci, a junior, then lifted a sacrifice fly ball to left field to plate Imbriano.

Wakefield then tried a double steal but McGunigle was thrown out third base for the final out of the inning. But the Warriors had all the runs they needed.

The Warriors wrapped up league play with a close 1-0 victory over Watertown in a pitchers’ duel at Walsh. Wakefield finished with a 14-2 record in the M.L. Freedom division.

The story of the game was junior right-hander Ben Coccoluto who hurled a two-hit shutout over six innings to earn the win. Coccoluto struck out six batters and walked one. Coccoluto threw 76 pitches, 52 of which were for strikes.

“Coccoluto pitched an unbelievable game,” said Forbes. “He pounds the strike zone. I think he has given up only eight hits all season.

Chanley hurled the seventh inning to earn the save giving up no hits. Chanley threw six pitches, five of which were strikes.

Wakefield scored the only run of the game in the fourth inning as it only had four hits itself.

Auld had a hit and scored the run, while Imbriano also had a single. Guanci had two hits with one of them being a double.

Shea had the RBI to score Auld.

Auld and Smith also stole a pair of bases and McGunigle drew the lone walk.

Wakefield wraps up the regular season with a makeup game against Austin Prep tomorrow afternoon at 3:45 p.m. at Walsh Field.