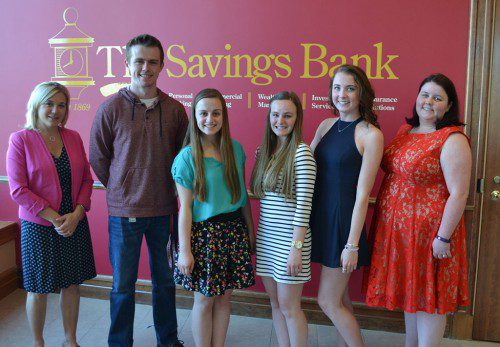 WAKEFIELD – The Savings Bank will again sponsor the traditional grand march before the Wakefield High School Class of 2016 senior prom which will be held on Wednesday, June 1. This is the 19th consecutive year that The Savings Bank has sponsored the popular event that starts at 5:30 p.m. on Wakefield’s Veterans Memorial Common.

Family and friends of Wakefield High School’s Class of 2016 will have an opportunity to photograph the students and their prom dates before they attend the prom at the Danversport Yacht Club.

As the sponsor, The Savings Bank provides a disc jockey that plays background music and makes related announcements before and during the procession through the Veterans Memorial Common. The Bank also decorates the Common with balloons and provides signage and safety personnel for the event.

Residents and businesses are reminded that the grand march will require the temporary closing of Church Street from Common Street to Main Street. Students will assemble at the First Parish Congregational Church by 5 p.m. Limousines and other vehicles used to transport the students to the prom will be parked on Church Street between the commons. When completed, the students will go to their limousines/vehicles and proceed north on Main Street to the prom.

All students who attend the prom at the Danversport Yacht Club must participate in the grand march. Additional information about the event has been sent to parents in a mailing from Wakefield High School.

Parents and friends are asked to park on adjacent streets in the downtown area. Police officers will be stationed at various locations and intersections. A letter will also be sent to neighbors in the weeks before the event. Residents are reminded that the one-hour parking restriction will be lifted during the event and that they should not park in areas posted NO PARKING.

In the event of inclement weather, the grand march will be held in the Wakefield High School Field House at 5:30 p.m. If the weather is questionable, High School administrators will make the decision whether to hold the grand march in the field house between 1 and 2 p.m. on the day of the prom. Information will be posted online on the WHS website: www.wakefield.k12.ma.us/whs.