Takes on Patriots in Div. 2 North first round game tomorrow at Walsh Field 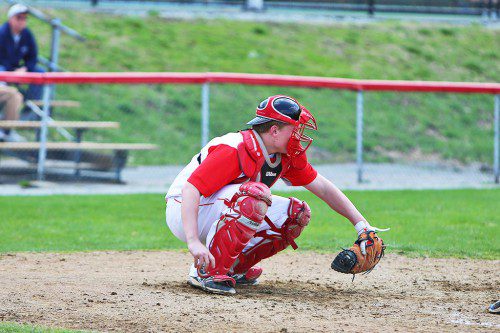 CATCHER Matt Mercurio, a junior, has been solid behind the plate all season and has been one of Wakefield’s top hitters this spring. (Donna Larsson File Photo)

WAKEFIELD — As the Wakefield Memorial High baseball team prepares for state tournament play, the one thing the Warriors will find is that Concord-Carlisle is a bit of a mystery to them.

But some people say that is what makes postseason play so special.

Wakefield, the fourth-ranked team with a 15-5 record, will face the 13th-seeded Patriots (10-10) in a Div. 2 North first round game tomorrow afternoon at 4 p.m. at Walsh Field.

The Warriors captured their first Middlesex League title since 1989 as they were crowned the M.L. Freedom division champs. The M.L. had nine teams qualify for state tournament berths with seven of them in the 16-team Div. 2 North field alone.

Concord-Carlisle, meanwhile, just barely got into the state tournament but plays in a quality league, the Dual County, and faces several Div. 1 schools in that league.

The Patriots finished the regular season with a 4-3 victory against Acton-Boxboro on Wednesday, May 27, the same day Wakefield last played, to clinch a state tournament berth.

A-B led 3-2 heading into the bottom of the seventh when the Patriots strung together four straight hits. Spencer Tonies drove in the tying and winning runs, Matt Paze and John Carroll, with a single.

Bryce Dion was 2-for-2 with a single and a triple in that contest.

The team is coached by Chris Aufiero.

“I don’t know much about Concord-Carlisle team,” said Coach Keith Forbes. “They play in a good league and they are usually in the state tournament so they’re used to being there. They are well-coached. I don’t really know them since I’m only in my second year. But they are a team usually makes the playoffs and I’m sure we can expect them to play well.”

The Warriors wrapped up the regular season last week with a win over Woburn and have been working to stay sharp in practice. Wakefield also had a scrimmage scheduled for Saturday as well while waiting for its first tournament game.

“To tell the truth, I don’t worry too much about the other team. We worry about what we can control which is our own game,” said Forbes. “We need to pitch well, hit the ball well and defensively play our game. We need to play our best ball in all three phases and play the way we are capable of playing. If we play a subpar game, we’ll lose. We need to take care of our business and worry about ourselves.”

The one thing about not facing and being familiar with the Patriots is that Wakefield really doesn’t have a scouting report on them. But playing in the Middlesex League and having faced pitchers such as Wilmington ace Jackson Gillis and Belmont ace Cole Bartels has prepared Wakefield for facing tournament caliber pitching, so Forbes believes his team will be ready when they come to bat tomorrow afternoon.

“Pitching is so big in high school. I believe we have faced as good a pitcher there is in the tournament with Gillis and Bartels,” said Forbes. “The Arlington pitcher and Lexington pitcher, (Jeff) Costello are good guys as well that we have faced. You know when you face guys like that you are going to have to grind it out. You need to play good defense and get a cheap run here or there. You need to scrap and be aggressive.

“I think we have played well in most of our 20 games,” continued Forbes. “There were one or two games where we didn’t play well in. We didn’t play against Lexington and Beverly but I think we competed in the rest of our games.”

The one thing about the first round of the state tournament is that every team in the postseason will have its number one pitcher hurling. That could make things tough since all the teams in the Div. 2 North sectional are all quality ballclubs.

“We just need to do what we’ve done all season and play the way we’re capable of playing,” said Forbes. “We’re the new guy to the dance. Maybe we’ll surprise a few teams and make a run.”

Andrew Auld, a junior right-hander, is expected to start the game for Wakefield. Auld has a 5-1 record and an ERA of about 2.00.

“Auld has pitched well and should give us an opportunity to win,” said Forbes. “Defensively, we need to make the plays in the field and we need to get the big hits when we need them. If we can do that, then we can make a real run.”

If Wakefield wins, then it will host a quarterfinal game on Monday, June 8 at Walsh Field. The Warriors will host the winner of the Winchester/Lynn Classical first round winner.