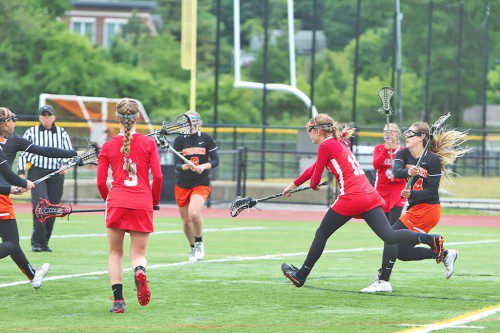 JULIANNE BOURQUE (right) scored both Warrior goals in Wakefield’s 15-2 loss to Woburn in a Div. 1 North first round game yesterday at Connolly Memorial Stadium. On the left is Kelsey Czarnota (#3). (Donna Larsson Photo)

WOBURN — The Wakefield Memorial High girls’ lacrosse team’s state tournament opener was eerily similar to its first game of the season on April 1. Not only were the Warriors facing Middlesex League rival Woburn but did so on a chilly day.

Also like the first meeting, Wakefield fell behind by a big deficit early in the first half. But unlike the April game, the Warriors were unable to make up any ground in the second half as they suffered a 15-2 defeat in a Div. 1 North first round game yesterday at Connolly Memorial Stadium.

Wakefield wrapped up the year with an 11-8 record, while the Tanners (12-4-3) move on to play Masconomet in the quarterfinal round.

The Warriors clinched a state tournament berth for only the third time in team history. However Wakefield is still searching for its first postseason win as the other two times the Warriors fell to M.L. rival Winchester in the opening round.

Woburn scored the first four goals of the game with Wakefield having a player in the penalty area at the time for most of the Tanner scores. Wakefield got a goal but then Woburn ripped off four more to take an 8-1 halftime lead.

The Tanners maintained the big lead and led 11-2 before it scored with 9:40 left resulting in running time the rest of the way. Woburn added three more goals for the 15-2 final score.

“We haven’t been in the tournament since 2012,” said Head Coach Cara Luca. “I was surprised that we were in Div. 1 North. We’ve played Winchester in the past but this time it was Woburn. It was what it was. We lost by four against Woburn earlier this season but I think we had some nerves out there today.

“We’re a young team with only two seniors, so we had inexperience in the state tournament,” continued Luca. “Turnovers hurt us. I think the experience will help us next year. I only lose two seniors so most of the team will be back next year.”

Taylor Kane got Woburn going at 23:01. The Tanners then got goals from Mary McCall and Nicole Gattaso at 22:03 and 21:08 with a man advantage to take a 3-0 lead. Woburn scored its fourth goal at 15:49 with Nicole Pacheco finishing off a pass from Morgan Bishop.

Wakefield cut the lead to 4-1 with its first goal of the game at 12:43. Junior Julianne Bourque took a pass from junior Isa Cusack and ran forward and fired a shot past Woburn goalie Marissa Gregory.

But it was all Woburn after that as the Tanners tacked on four more goals to have an 8-1 lead at the break.

But history wasn’t about to repeat itself again for the Warriors. Woburn stayed on the attack and the Warriors didn’t have an opportunity to mount a comeback.

The score remained that way until 14:50 when Bourque tallied her second goal of the game.

After the goal, Wakefield goalie Mikayla White (eight saves) came out of the game and junior Bianca Passacantilli finished the contest in net. She made two saves.

Gullage tallied a goal at 12:55 and, after a second yellow card was issued to a Warrior player and they were forced to play a man down, Emily Carpenter scored after taking a pass from Gullage at 9:40 to give the Tanners a 10 goal advantage at 12-2.

With the clock running the Tanners added three more goals at 4:05, 3:18 and 46.0 seconds to put the finishing touches on the one-sided affair. Caitlin Long scored on a Pacheco pass, Bishop found the back of the net again and Gullage tallied Woburn’s final goal.

“We had some chances but we shot the ball right at the goalie and made her look good,” said Luca. “We couldn’t capitalize when he had the chance. We weren’t making good passes. Overall, we had a great season and I’m sure the girls will work hard during the offseason. I’m very happy with how the season went.”