Baseball team sets its sights on a state tournament berth 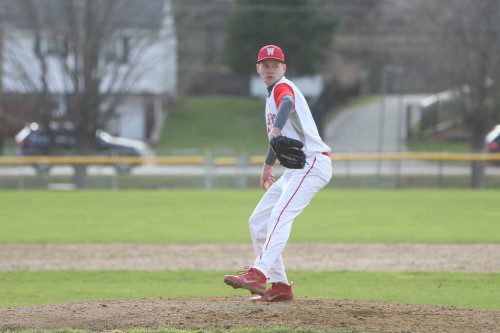 WAKEFIELD — In the 1960s TV show, “Get Smart,” Don Adams’ character often uttered the phrase, “Missed it by that much.”

The same be said of the Wakefield Memorial High baseball team as it came up one win short of qualifying for the state tournament and finished the year with a 9-11 overall record with a new head coach, Keith Forbes.

Now as the Warriors prepare for the 2015 season opener their main goal is an obvious one, clinch a state tournament berth.

Right now, Wakefield has been practicing inside the Charbonneau Field House due to the snow still on Walsh Field. Also, the snow covered fields most high school baseball teams have been dealing with have also resulted in all the scrimmages Wakefield’s had scheduled to be cancelled.

“It’s hard to keep the players motivated while we practice inside,” said Forbes, in his second year. “They have cabin fever and they’re itching to get out there. But there is nothing we can do about it with the wet field. We’re (the coaching staff) doing everything we can to keep the players focused. They are a more mature group and many of them have played travel baseball. So, we’re dealing with it.”

The Warriors have eight returning seniors and five returning juniors who played integral roles with the team a year ago. Wakefield graduated five seniors from the 2014 squad which leaves Forbes with a roster of many players with a good amount of varsity experience.

Caraglia returns to play second base, while both Cecere and Fitzgerald play the outfield. Cecere will also see time as a designated hitter. Cecere batted .313 a year ago.

Martin, an outfielder a year ago, is still recovering from his season ending torn ACL and MCL injury. He is likely going to miss the spring season as well.

Patti returns to play the hot corner, while Smeglin is back to play the middle infield at second base and shortstop. Smegin also pitches.

Stackhouse is a first baseman and a relief pitcher, while Greer is an outfielder, catcher and a pitcher.

Auld is a first baseman and a pitcher, while Imbriano plays shortstop and also pitches. Beck plays the outfield and McGunigle is an outfielder/first baseman. Mercurio returns as the team’s catcher.

McGunigle batted .333 with four RBIs last spring and Auld was among the leaders on the pitching staff with a 3-2 record and a 2.47 ERA.

Wakefield has seven players that will see time with both the varsity and JV teams depending on the need.

Juniors Adam Chanley and Max Marchino are pitchers. Junior Dylan Melanson is a pitcher and a designated hitter.

Sophomore Mike Guanci can play third base, catch and pitch. Tim Hurley, another sophomore, is a middle infielder who can play shortstop or second base.

“We got off to a 7-3 start last year then we played five games in six days due to rain outs and we hit a rough stretch that cost us,” said Forbes. “You can’t worry about it (the weather). I think we have one of the deepest teams in the Middlesex League. We have a good amount of pitching and I think we might be as good as any team in the league.”

Forbes is hoping that if there are any postponements then having the extra week at the end of the season with the state tournament cutoff date being pushed back will help the Warriors get caught up without having to play four to five games a week.

“We’ll be outside soon enough. The field needs to dry and then it needs to be turned over to get it ready,” said Forbes. “We had a lot of sophomores last year and I think over the long run that will help us. I wanted to get younger and have the younger players get some innings under their belts. It’s a good group of seniors and juniors and a handful of sophomores. They’ve stayed positive.

“Our goal is to make the playoffs,” continued Forbes. “Being so close last year might have been a good thing. It will push them harder. We need to stay consistent. As far as the field conditions and the weather, we are going to have deal with it. We’re looking forward to the season. I think we’ll have a successful season.”

Returning to help Forbes at the varsity level are assistants Gus Dettorre and Jason Zerfas. The JV coach head coach is Tom Leahy and his assisted by Brian Millea. The freshman head coach is Scott McGonigle. McGonigle will be assisted by Chris Giantassio who is new to the program this spring.

Wakefield is scheduled to open up the season tomorrow afternoon at 3:45 p.m. when it plays Woburn at Ferullo Field in Woburn. That is, of course, if the weather and field conditions permit.