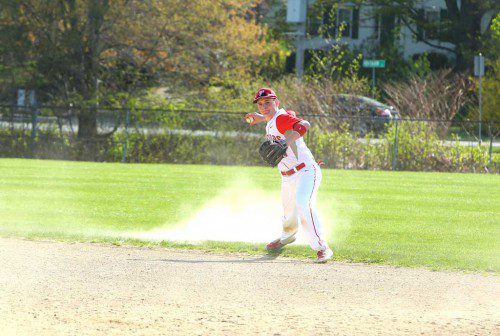 SHAWN SMEGLIN, who also plays second base, pitched six plus innings for Wakefield yesterday against Burlington at Walsh Field. Smeglin earned the victory as the Warriors rallied late to pick up their hurler. (Donna Larsson File Photo)

WAKEFIELD — It seems like it is not a matter of if Wakefield is going to rally, but when.

The Warrior baseball team spotted Burlington four first inning runs but stormed six runs across in the last of the fifth inning and added two more in the sixth as it posted a 9-4 come-from-behind victory yesterday afternoon at Walsh Field.

Wakefield increased its overall record to 13-3 on the year and are 11-3 in the Middlesex League Freedom division. The Warriors swept Burlington and everyone else in the Freedom division which is the first time it has been done since the league went to two tiers beginning in 2012. Wakefield’s three league losses are in crossover games against Lexington, Arlington and Belmont.

Right-hander Shawn Smeglin surrendered four runs in the top of the first inning but kept the Red Devils off the scoreboard after that. Smeglin pitched six plus innings giving up four runs (two earned) on eight hits. The senior struck out five batters, walked two and threw a wild pitch.

Junior right-hander Andrew Auld pitched one inning, the seventh, and struck out a batter.

Meanwhile, Wakefield’s big hit came from Paul McGunigle who clubbed a three-run double in the fifth inning which gave Wakefield the lead, 6-4. Anthony Cecere also had a big hit with a two-run single in the frame and Joe Greer had two hits and knocked in two runs in the contest.

“We swept the small (Middlesex League Freedom division),” said Head Coach Keith Forbes. “We gave up the four runs and I’m not sure if we would’ve come back from that last year. But this year’s team is special. They have shown the perseverance and toughness. They don’t quit.”

The bottom of the fifth started with Wakefield trailing by a 4-1 score. Neil Fitzgerald drew walk to lead the frame off. Mike Caraglia doubled through the vacated hole at shortstop and into the gap in left-center field on a hit and run play to put runners on second and third. A ground ball to shortstop resulted in Fitzgerald being tagged out at the plate for the first out.

Corey Imbriano, who reached on the fielder’s choice, stole second and then Andrew Patti walked to load the bases. Cecere came up with a clutch hit as he dropped a single down the left field line as both Caraglia and Imbriano crossed the plate to cut the score to 4-3. Matt Mercurio was hit by pitch on the helmet to reload the bases. McGunigle crushed a double to the gap to clear the bases.

Burlington pitcher Evan Camilleri was lifted as he went four and a third innings giving up six runs on six hits while striking out three, walking two and hitting a two batters. He also threw a wild pitch.

After a ground ball moved McGunigle to third, Greer singled to left field to plate McGunigle with the sixth run of the inning.

“Neil drew a walk and then Caraglia got a hit on the hit and run play,” said Forbes. “We had a misread on the out at the plate. They didn’t quit. Cecere had a big hit. Mercurio has been playing well all season and Paul has been hitting the ball hard. It’s exciting to see.”

The game didn’t start off so great for the Warriors as the Devils took a 4-0 lead after half an inning and hit the ball hard against Smeglin.

That was it for the Red Devils as Smeglin kept them off the scoreboard for the next five innings. The righty had three 1-2-3 innings. He gave up three hits after the first and walked a batter. After surrendering a single and walking a batter in the top of the seventh, he was lifted in favor of Auld. Auld retired Burlington 1-2-3 to help preserve the victory for the Warriors.

Auld was hit by a pitch in the fourth but Wakefield broke through in a big way in the fifth as it sent 10 batters to the plate and took the lead.

The Warriors added two more runs in the home half of the sixth for the 9-4 final score.

Imbriano walked and Patti singled to right field putting runners at the corners. Patti easily stole second and then Mercurio drove in both base runners with a single to left field.

“We want to continue to play in our last four games,” said Forbes. “We want to get as high a seeding as we can for the playoffs.”

In Wednesday’s 4-2 victory over Melrose, the Warriors had six hits total. Mercurio and Caraglia led the way with two hits apiece while Tighe Beck and McGunigle both had one hit. Mercurio had two doubles and an RBI. McGunigle and Caraglia both knocked in runs as well.

Joe Stackhouse started the game on the mound and went two and a third innings. The senior left-hander gave up one run (unearned) on one hit. He walked four struck out three and a hit a batter.

Mike Guanci, a sophomore, hurled the final four and two-thirds innings. The sophomore surrendered one run (unearned) on three hits while striking out four and walking two.

Wakefield hosts Woburn on Monday afternoon at 3:45 p.m. at Walsh Field in what will be a non-league contest.