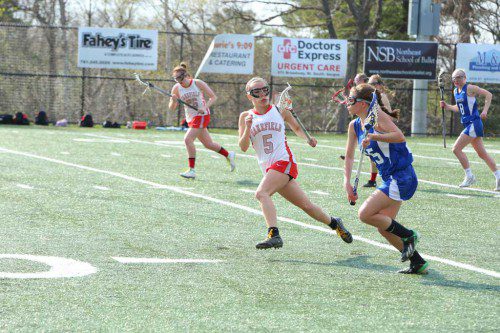 WAKEFIELD — The Wakefield Memorial High girls’ lacrosse team split its last two games which were both under the lights. The Warriors blasted Burlington by an 18-8 tally last night in its regular season home finale at Landrigan Field after dropping an 11-8 decision to Melrose on Wednesday night at Fred Green Memorial Field.

The Warriors are now 10-7 overall and 4-7 in the Middlesex League Freedom division.

Against Burlington, Wakefield played very well last night. The offense was on clicking on all cylinders.

“They did quick passes quick give and goes which resulted in quick goals,” said Coach Cara Luca.

Kelsey Czarnota had seven goals and one assist. She controlled the draw 12 times in the game. That helped the offense get going.

Julianne Bourque had five goals and three assists. She scored the last three goals of the game for Wakefield.

Emily Ryan had two goals, Brianna Smith had three goals with three assists and Jess Vinciguerra had one goal.

“Defensively we played good. We were a little rusty to start but picked right back up and marked up,” said Luca. “Bianca (Passacantilli) recorded seven saves today. Our record Is now 10-7.”

Against Melrose on Wednesday night, the Warriors started off good and it was a game that went back and forth. What hurt Wakefield once again was its passing, catching and receiving on the run.

Luca felt that the Warriors made bad passes which cost them the game. She feels that Melrose was a very beatable team. Wakefield just didn’t have it that night.