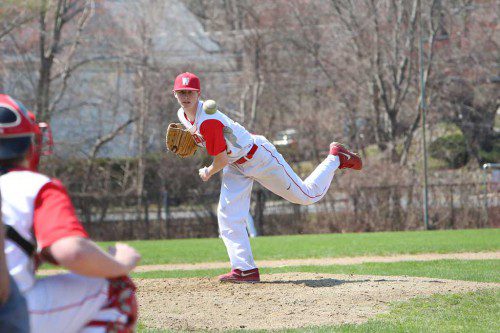 LEFT-HANDER Joe Stackhouse, a senior, has been stellar out the bullpen this season for the Warriors. Stackhouse helped Wakefield get out of a sixth inning jam in its 4-2 triumph against Winchester on Friday at Walsh Field. (Donna Larsson File Photo)

WAKEFIELD — Sophomore right-hander Mike Guanci earned his third victory of the season on the mound and is 3-0 on the year. But on Friday afternoon at Walsh Field, Guanci didn’t have his best stuff but battled valiantly and gave the Wakefield Memorial High baseball team a chance to win.

The Warriors also got good relief pitching from Joe Stackhouse and Andrew Auld, played good defense and had some timely hitting as they topped Winchester by a 4-2 score.

Wakefield increased its record to 7-2 overall and 6-2 in the Middlesex League Freedom division with the victory.

Guanci pitched five plus innings giving up two runs (one earned) on four hits while striking out three and walking three batters.

Stackhouse, who has been stellar out of the bullpen for the Warriors this season, hurled an inning and a third giving up one hit while striking out one and walking one.

Auld pitched two-thirds of an inning and earned the save. Auld struck out one of the two batters he faced.

Offensively, Shawn Smeglin and Anthony Cecere had two hits apiece with each hitting a double. Cecere also drove in a run.

Corey Imbriano, Matt Mercurio and Joe Greer each had one hit. Mercurio also had a double and he drove in two of the four Warrior runs.

Wakefield also capitalized on two out of three Winchester errors committed to plate two out of its four runs.

“Guanci pitched a good game,” said Coach Keith Forbes. “He gave us a chance to win. He wasn’t as sharp as he was in his previous two starts but he still battles. He was able to battle through and he kept us in the game. Stackhouse got us out of a tough game in the sixth and Auld closed the game out.

“We played clean defense and in the fifth we got two more runs. We swung some big bats and got some timely hits,” added Forbes. “If we stick to doing those things, we’ll give ourselves a chance to win.”

Wakefield took a 1-0 lead in the bottom of the first inning. Imbriano reached on an error at third base and Smeglin smacked a double down the left field line. After a pop up to shortstop, a ground ball to short by Mercurio brought in Imbriano.

The Warriors tallied another run in the second inning to take a 2-0 lead but could’ve had more runs if not for a fluke double play turned by Winchester.

But when it appeared like Wakefield was going to have a big inning, it was snake bit a little. Smeglin hit a line drive which third baseman Preston Burbine nearly made a diving catch on. The runners weren’t sure if the ball was caught or not and were caught up in between. Burbine tagged third base for the force then threw back to the pitcher, Steve Michienzi, who tagged both Imbriano and Smeglin who were both standing on first base. Imbriano was called out for the third out of the inning.

Winchester, which was retired in order in the first two innings, scored its first run in the top of the third inning. Burbine reached on an error at first base and Karl Ahoronian walked. Matt Mancleo singled to left field to load the bases. Tim O’Brien doubled to the gap in right-center field as Burbine crossed the plate.

But the Sachems helped Wakefield out by making two base running blunders which resulted in two outs. Ahoronian hesitated slightly while rounding third base and was thrown out at the plate. On the same play, O’Brien rounded second and wandered too far from the bag and was thrown out as well for the second out as the Warriors turned a 9-4-2-4 double play. A strikeout then ended the frame.

Tighe Beck reached on an error and stole second in the third. But it wasn’t until the fifth when the Warriors scored again as they pushed two more runs across to take a 4-1 lead.

The Sachems got one more run in the top of the sixth as Wakefield went to its bullpen.

Michienzi bunted the ball down between the pitcher’s mound and first base for a single. Warren Asdornvitakrai singled to right field to put runners at the corners. With Stackhouse pitching, Davis Clarke reached on a fielder’s choice with Asdornvitakrai being forced at second base as Michienzi scored.

Kevin Irish singled to left field and Zack Bladd reached on an error to the load the bases. But Stackhouse got a strikeout and a fly ball to right field to end the threat.

Cecere doubled to center field in the home half of the sixth inning but was stranded at third base. In the top of the seventh, O’Brien walked with one out which resulted in Auld being brought in to close out the game. They junior right-hander struck out a batter and induced a ground ball back to the mound to end the game.