Softball team has more than enough against Winchester 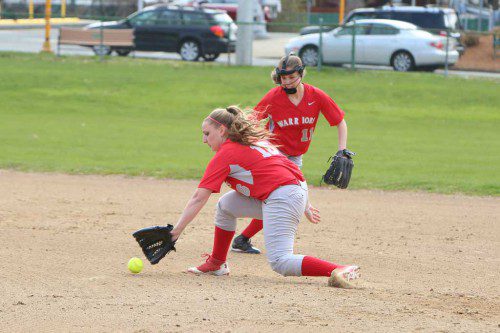 HAYLEY KADDARAS (#16) gets ready to field the ball in her glove at first base as second baseman Vanessa Kaddaras (#11) backs up the play. The Warrior softball team crushed Winchester by a 13-1 tally on Friday at Vets’ Field. (Donna Larsson Photo)

WAKEFIELD — The Wakefield Memorial High softball team hosted Winchester and sent its guest away in rude fashion, beating the Sachems 13-1 in a game that was called due to the “mercy rule” to bring their record to 8-3 on Friday afternoon at Vets’ Field.

“It was a strange game. It wasn’t our greatest game. I’m probably being picky when I say this but I thought we could’ve hit the ball a little harder. I don’t think we had any shots in the outfield but a W is a W,” said Wakefield coach Rick “Coach Q.” Quattrocchi.

Wakefield picked up three runs in the bottom of the first inning. Meghan Burnett led off and reached on an infield single and then stole second. A ground out to second put her on third, from where she scored on a single by Emma Kraus, who then stole second. Nicole Gasdia flied out to center field but Kraus tagged up and headed to third. Sarah Donovan’s throw to third was off the mark and not backed up by pitcher Jenny Benedict and rolled into the third base dugout, allowing Kraus to score to make it 2-0.

Alexi Truesdale homered to straight away center to give Wakefield a 3-0 lead before a ground out ended the inning.

Winchester managed to touch Wakefield pitcher Amanda Boulter for a run in the top of the fourth inning. Renee Zahigian drew a one-out walk and, after a strikeout, Brooke Cavaretta singled as did  Donovan to load the bases. Kara McGeehan singled to left to score Zahigian with the lone Winchester run of the game to make it 4-1.

“The only thing we’re worried about is getting into the (state) tournament and we’ve got two games (to win) to get into the tourney and after that everything’s gravy,” noted Coach Q.

The home team blew the game open in its half of the fourth inning. Olivia Dziadyk drew a one-out walk and, after two ground ball outs to the pitcher that put her on third, scored on a passed ball. Vanessa Kaddaras and Burnett drew consecutive walks followed by a single from Boulter that scored Kaddaras. With runners on second and third, Kraus dropped a single behind second on which Burnett and Boulter were able to score to give Wakefield an 8-1 lead.

Gasdia drove in Kraus with a single, taking second on the throw in and moving to third on a wild pitch. Truesdale followed with a walk and then Dziadyk brought in Gasdia with a single to left. Hayley Kaddaras reached on an error that allowed Truesdale to score with the final run of the inning to put Wakefield up 11-1.

Wakefield was able to put the game away in the fifth inning. Meg Gibbons leading off with an infield single down the third base line that stayed fair.  Burnett also had an infield hit and then, after a fly out to center, Kraus, who usually bats right-handed, came to the plate and stood in the lefty batter’s box. Kraus then laid down a one-armed (left arm) drag bunt that she easily beat out to load the bases.

“Coach (Stephanie) Martin went to Assumption (College) and was a Hall of Fame player there (and) an All American. She was a slap hitter so, during the offseason she was showing Kraus how to bunt like that and I don’t like it because I want Kraus to hit the ball a mile but certain situations we’d try it. So, Steph kept pushing me and said, ‘Coach, now’s the time to do it’ and so we did it and it was a beautiful bunt and you’re not going to throw her out,” explained Coach Q.

Kraus also tried to score but was tagged out, although it became irrelevant when it became apparent that Wakefield had reached the 12 runs after five necessary to secure the mercy rule victory.

“We just did it today and it’s a win,” exclaimed the coach.