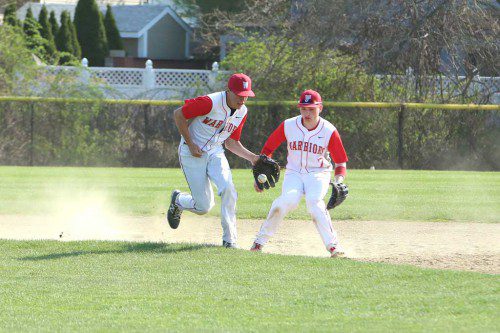 INFIELDERS Corey Imbriano (left) and Shawn Smeglin converge on a ground ball in a recent game. Imbriano pitched three innings of relief yesterday against Woburn while Smeglin had two hits, a sacrifice and scored a run. (Donna Larsson File Photo)

WAKEFIELD — The Warrior baseball team has been masterful at rallying late in games to win this season. But yesterday afternoon against Woburn, Wakefield was unable to plate the game-winning run despite several chances as it dropped a 4-3 contest against the Tanners in an eight inning nail-biter at Walsh Field.

The loss snapped a six game winning streak by the Warriors as they dropped to 13-4 overall on the season. Yesterday’s game was a non-league game. Wakefield will face Woburn again next week in Woburn in the Middlesex League crossover game.

The Warriors erased a 3-1 deficit with single runs in the sixth and seventh innings to tie the game at 3-3. Wakefield certainly had its chances to win as it left the bases loaded in the sixth, seventh and eighth innings and stranded 11 runners for the game.

Woburn, meanwhile, scored three runs in the second and plated the go ahead run in the top of the eighth inning to take a 4-3 lead. The Tanners made the one run advantage stand up and pulled off the upset win to go to 5-12 on the year.

“We’ve been playing good baseball,” said Coach Keith Forbes. “We were a little lackadaisical against Woburn because of their record. They have been in some close ballgames and they are well coached. They took it to us. We had an opportunity but we need to play the same from start to finish. Our focus should be the same in the first inning as it is in the sixth and seventh innings and even the eighth inning.”

In the top of the eighth inning, Christian Barrett led off with a base hit to right field. After moving to second on a sacrifice bunt, Shawn Murphy lined a single to right field as Barrett scored.

The Warriors had a chance to tie or even win the game in the bottom of the eight inning. Andrew Auld and Joe Greer both reached safely on errors. Shawn Smeglin moved the runners up to second and third with a sacrifice bunt. Mike Caraglia then walked to load the bases. A strikeout and a ground ball ended the game.

Wakefield reliever Corey Imbriano, making his first appearance on the mound this season, hurled three innings of relief and took the loss. The junior right-hander gave up one run on two hits while striking out three and walking one. He also threw a wild pitch.

The Warriors could’ve made a winner of Imbriano had they got one or two clutch hits in the sixth and seventh innings to overtake the Tanners.

Wakefield trailed 3-1 headed into the bottom of the sixth inning. Neil Fitzgerald reached on an error at shortstop and stole second base. With two outs, Matt Mercurio singled by second base as Fitzgerald came around and scored. Paul McGunigle (two hits) singled into center field to put runners on first and second. Auld walked to load the bases but a pop to third base ended the frame.

The Warriors tied the game at 3-3 in the last of the seventh inning. Smeglin (two hits) reached on an infield single to third base. Caraglia walked and a ground out to second moved the runners up to second and third. A grounder to first by Imbriano brought in Smeglin to tie the game at 3-3.

Anthony Cecere was then hit by a pitch and Mercurio was intentionally walked to load the bases. But a fly ball to center field resulted in the game going to an extra frame.

Woburn took a 3-0 lead in the top of the second off Warrior starter Joe Stackhouse. Stackhouse, a senior left-hander, went two plus innings giving up three runs on two hits. He struck out three batters, walked two and committed a balk.

Barrett and Tom Connors walked to lead off the second inning. Murphy singled to left field to scored Barrett from second base. With runners at second and third after Murphy took second on the throw home, Carter bunted on a suicide squeeze play as Connors crossed the plate. With Murphy standing at third, Stackhouse was called for a balk bringing in the third run.

From the third to the sixth innings, sophomore Ben Coccoluto pitched in relief and kept the Tanners off the scoreboard. The right-hander gave up one hit while striking out three and walking three.

Wakefield plated its first run in the last of the third inning. Smeglin ripped a double to left field, took third on a ground ball to second and scored on a sacrifice fly ball to center field by Fitzgerald to cut the lead to 3-1.

But the Warrior offense didn’t do much in the first five innings. A couple of players reached on errors. There were hits by Joe Greer and McGunigle. Also Mercurio was hit by pitch. But Wakefield was unable to come up with the clutch hit. Also the Warriors were aggressive on the bases, like always, and had several runners thrown out trying to steal bases.

“We have two league games remaining,” said Forbes. “We played well against Reading the last time from start to finish.”

The Warriors host the Rockets tomorrow afternoon at 3:45 p.m. at Walsh Field.