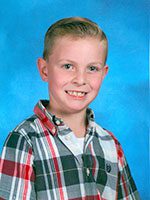 Sonny’s life would seem short to most, but those touched by his warm and gentle ways say Sonny had a deep understanding of people that far exceeded his age. His desire to stand up for what was right and to selflessly help out set him apart. His contagious smile that shone bright like the sunniest of days was freely offered to everyone and would immediately lift you up if you were down.

His five older siblings affectionately called him “everyone’s little brother” because his favorite thing was being with his family and their friends. Sonny loved playing football and wanted to make sure everyone played fairly; he was always looking out for his friends. Sonny and his two friends, Drew and Kevin, created a company called “Massive Breaker” where they were equal partners designing and creating an online video game world. In his brief time with us, Sonny has taught us all more about life than we could ever imagine; we are all better for having known him.

Sonny leaves behind a large, loving family and a large group of extended friends and family who will feel this loss for the rest of their lives. He is survived by his loving parents, Tony and Erin Tropeano of Lynnfield; his older siblings, Mikey, Tony Jr. and his fiancée Felicia, Nick and his girlfriend Francesca, Joe and his girlfriend Katelyn, Stephanie and Francesca.

The family wishes to thank the many people who have been supportive during this difficult time. To best honor Sonny’s memory, it is requested that in lieu of flowers donations may be given to the “Sonny Tropeano Memorial Scholarship” and sent to the Wakefield Co-operative Bank, 596 Main St., Lynnfield MA 01940.