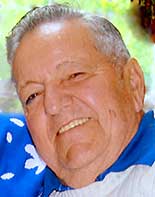 Bill was the guy who always caught your heart with his smile, wit and generosity. Always active, in his early days Bill enjoyed playing softball, farming, ice fishing, splitting wood, working around the yard and looking after his beloved wife of 62 years, the late Jacqueline, in addition to the rest of his family.

Bill was born in Andover on his parents’ kitchen table. As a boy, he rode his horse downtown, served in Africa during the Korean War, and returned to build his Andover home, where he lived 64 years. Bill worked for the town of Andover for 45 years when he eventually retired as the supervisor of parks and grounds. A golfer, bowler, card shark, dog lover and best friend, the twinkle in his eye could never be mistaken and will never be replaced.

Calling hours were Wednesday, July 27 from 4-8 p.m. at the Conte Funeral Home in North Andover. A burial service will be held at the funeral home on Thursday, July 28 at 10 a.m. Memorial contributions can be made to the Merrimack Valley Hospice House, 360 North Ave., Haverhill MA 01830.