Lived in town for 20 years 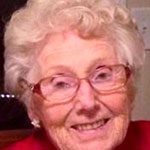 Plaistow, NH: Bjorg (Michelsen) Midttveit Dame, 89, a resident of Plaistow for the past four years, died Saturday, January 17, 2015 at Exeter Hospital.  Born in Oslo, Norway, daughter of the late Waldemar and Halldis (Haavelsen) Michelsen, she was educated in local schools and came to the United States in 1947and settled in the Boston area.  A resident of North Reading, MA, from 1960 until 1980, Mrs. Dame was employed at Transitron in Melrose and later in quality control for Compugraphics, from where she retired.  Mrs. Dame and her late husband Roy Dame retired to Brewer Maine, in 1980 and she resided there until moving to Plaistow in 2010. She was a member of Redeemer Lutheran Church of Bangor and The Sons of Norway, Waltham, MA. She enjoyed knitting and sewing, and in her younger years, she was an avid skier. A loving wife, mother, grandmother and great-grandmother she was completely devoted to her family.  The wife of the late Roy C. Dame, and the late Nils Midttveit, she is survived by a daughter and son-in-law, Tone and Robert Crossman of Plaistow, two sons and a daughter-in-law, Roy F. and Elizabeth Dame of Brewer, Maine, and Robert E. Dame of North Chelmsford, MA, five grandchildren, Heather LaFontaine, Erica Dow, Kristen Carrier, Tayt Dame and Tristan Dame, nine grandchildren and several nieces and nephews. She was predeceased by a great-grandson Kayden LaFontaine.  Relatives and friends are invited to her Life Celebration on Wednesday, January 21, 2015 from 5 to 8 p.m. at Brookside Chapel & Funeral Home, 116 Main St., Plaistow, NH. Her funeral will begin on Thursday at 8:45 a.m. from the funeral home with a Funeral Eucharist at 10 a.m. in Saint Christopher’s Church, East Road, Hampstead, NH. A private family burial service will take place at a later date in Plaistow Cemetery. In lieu of flowers the family asks that memorial donations may be made to First Candle, 9 Newport Drive, Suite 200, Forest Hill, MD 21050, or to Parkinson’s Disease Foundation, 1359 Broadway, Suite 1509, New York, NY 10018