Come up short against Everett in thriller 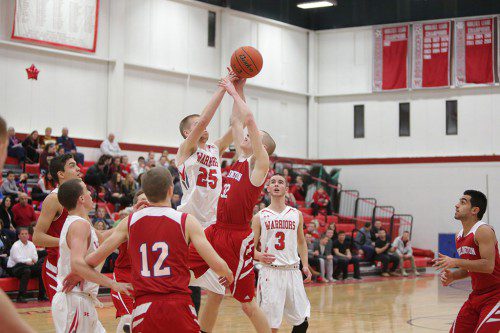 ANDREW AULD, a junior (#25), goes up for a rebound during Wakefield’s tournament clinching win against Burlington on Friday. Wakefield played Everett in an exclusionary game yesterday at the Charbonneau Field House and came up short in an 85-82 overtime thriller. (Donna Larsson File Photo)

WAKEFIELD — Monday afternoon at the Charbonneau Field House, the Wakefield Memorial High School boys’ basketball team hosted a matinée matchup with the Everett Crimson Tide in what was designated an exclusion game for the Warriors so a loss wouldn’t count against their record.

Everett (13-3) is ranked #19 on the Bostonglobe.com high school top 20 rankings and came in as an exempt opponent for Wakefield.

Despite not counting against their record the Warriors gave it their all, taking the Tide into overtime but in the end they fell by three points, 85-82.

“It was a great effort,” Coach Brad Simpson said. “That wasn’t an exclusion game for them. It would have been a tough loss for them.”

There aren’t many opponents like this Everett team that Wakefield would face in the Middlesex League.

When the game was scheduled, it was intended as a tune up before the post-season but, due to postponements, Wakefield still has a very important game against Melrose remaining on the schedule.

“When I scheduled the game, I scheduled it with the idea that we wouldn’t be having all these postponements,” said coach Simpson. “I told the kids that tomorrow when they get up they’ll be glad they played instead of practiced.”

The Crimson Tide posed a difficult matchup for Wakefield with their size and athleticism but they lacked some fundamental organizational basketball techniques that Wakefield was able to exploit early on.

Everett didn’t run any type of set offense when they had the ball, they just attacked the basket and looked to score or kick to a teammate spotting up. Wakefield exploited its lack of game planning with some back screens and backdoor cuts on offense and a zone defense.

Everett’s defensive scheme focused on applying pressure to the ball handler and jumping into passing lanes for interceptions, then looking to run on the fast break.

What the Crimson Tide lacked in discipline they made up for with speed, strength and size. With the Warriors’ playing without Brian Dickey and Zach Price, the rest of the squad was in for a challenge.

From what everyone saw, the Warriors stood up to the challenge and passed the test.

Coach Simpson said so himself in as few words saying, “Even though we lost the game I think we passed the test.”

In the first quarter, the two teams traded baskets and it was a high speed sprint from end to end. Wakefield played well in the first, going for 15 points and really spreading the ball around very well.

Six different Warriors scored in the first quarter, led by Elijah Nardone with four points, including a three-pointer.

Alex McKenna had three points on a field goal and a free throw which came as an Everett player picked up a technical foul for touching the ball while it was out of bounds after a basket.

Everett had a solid quarter and led 18-15 after one.

Jon Miller opened the scoring in the second quarter with a three to tie the game at 18-18. Everett came down and got two but Chris Calnan got the points back on the very next possession.

Tying the game at 20-20, Calnan’s bucket sparked a 9-0 Warrior run. The streak was highlighted by the combination of Calnan and Corey Imbriano linking up on a few occasions, with Imbriano the benefactor scoring six of his eight second quarter points during the 9-0 run.

The Warriors finished the second on a 22-12 run, taking a 40-33 lead into the locker room at halftime.

Everett came out and continued to try to use their athleticism and play at a frenetic pace in the third but the Warriors stayed with them step for step.

Early in the third, Everett’s senior guard Devonte Davis was fouled by Kobe Nadeau while driving to the basket. Davis appeared to take exception to the foul and threw the ball off Nadeau as he got off the ground. Davis was issued a technical foul and ejected from the game. Imbriano was also issued a technical for stepping in and confronting Davis with a shove.

With Calnan in foul trouble, Coach Simpson was forced to use some of his backup guards and though they were put to the test, they didn’t relinquish the lead as the Warriors scored 16 points to Everett’s 18.

MJ Urbano had seven of his nine points in the third quarter, making two free throws, one three-pointer and one from just inside the line along the baseline.

The third quarter was riddled with fouls, as each team reached the double bonus picking up more than 10 fouls per team.

When free throws weren’t being shot, the pace didn’t slow down. Wakefield scored seven of the first 10 points but Everett came out rolling and went on a 23-12 run.

Wakefield was on the ropes, it needed a big shot and Calnan delivered a three-pointer right on time. Everett missed four clutch free throws after the Calnan trey cut the deficit to three points.

Calnan went to the line twice after he cut the lead. The first time he made 1-of-2 from the charity stripe. The next time Calnan stepped to the free throw line it was with .8 seconds remaining for three shots down by two points.

Calnan made the first, missed the second and hit the third to send the game into overtime tied at 74-74.

In the overtime, the game was decided by who shot better at the free throw line. Everett shot 8-of-13 from the stripe while Wakefield shot just 2-for-4.

Nardone had a late field goal to cut it to 85-82 but it wouldn’t be enough as Wakefield was narrowly defeated.

The Warriors had five players foul out by the end of the game and Coach Simpson was pleased with the effort he got from his bench.

“Considering we were missing two important people, it was toe to toe,” Simpson said. “The idea was that every kid was going to play today. I didn’t imagine they would have to play in the manner that they did. We were in big foul trouble. I needed the kids all the time. (The) Good thing for me is, when you go to your bench this late in the season you like to see a response. They responded. It worked out well.”

Coach Simpson stressed that this game was almost insignificant compared to the task in front of the Warriors.

“This is not the highlight of the week,” Simpson said, in reference to the matchup on Wednesday night. Wakefield is in for another heated contest as they head to Melrose to take on the Red Raiders in a game with huge implications as Middlesex League Freedom division crown. The game is at 5 p.m.