Warriors come up short against undefeated Melrose in league showdown 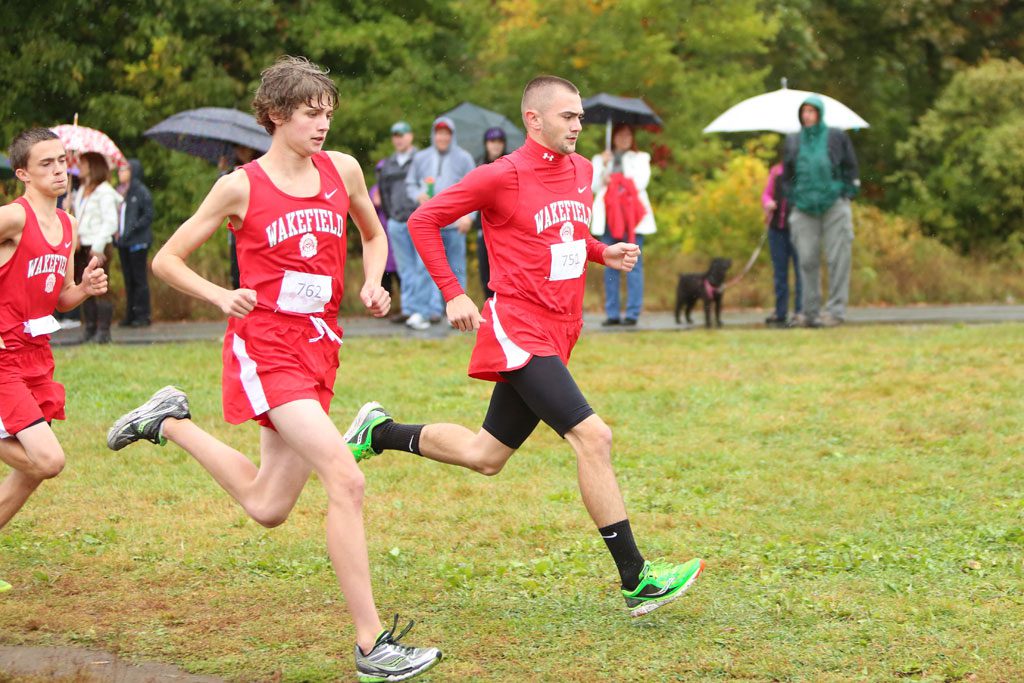 SENIOR JACKSON Gallagher (right) and junior Alec Rodgers (left) both ran well as did the rest of the Warrior boys’ cross country team yesterday afternoon against Melrose. Gallagher posted a fourth place time of 17:05 and Rodgers posted a ninth place time of 17:41. Wakefield came up short against the Red Raiders, 19-36, for its first league loss in nearly four years. (Donna Larsson File Photo)

WAKEFIELD — The Wakefield Memorial High boys’ cross country team’s three years of dominance in the Middlesex League Freedom division came to an end against rival Melrose yesterday afternoon as the Warriors suffered a 19-36 setback at the Beasley Track and Field Course in a battle of unbeaten teams in the division.

“We knew Melrose was a very good team and it was going to be a tough day,” said Coach Perry Pappas. “Melrose had a strong performance and they’re young. We’re not too far away and we want to be peaking in November for the state meets.”

Melrose sophomores Kevin Wheelock and Adam Cook and senior Duncan Locke captured the top three places for the Red Raiders. They posted times of 16:33, 16:37 and 16:45.

Senior co-captain Jackson Gallagher and junior Rich Custodio ran hard and finished in fourth and fifth place with times of 17:05 and 17:12.

Melrose claimed sixth and seventh place as junior Robbie Hanlon and sophomore Sean Conlan timed in at 17:16 and 17:19.

Sophomore Ryan Sullivan had a nice finishing kick as he finished in eighth place at 17:40, a second ahead of teammate Alec Rodgers, a junior. Rodgers was ninth at 17:41.

Wakefield also grabbed 10th and 11th place behind the efforts of Jack Stevens, a sophomore, and Robert Shaw, a freshman. Stevens clocked in at 17:46 and Shaw posted a time of 17:49.

“Jack Gallagher ran his best but came up short,” said Pappas. “We had some good performances. We have Burlington next week and we’ll get ready for that meet. A lot of these guys have the talent and they’ve worked hard. We came up short.”

The Warriors had many more runners in the race with the JV runners competing as well.

Wakefield faces Burlington next Tuesday afternoon at 3:45 p.m. in the dual meet finale at the Burlington High School course.