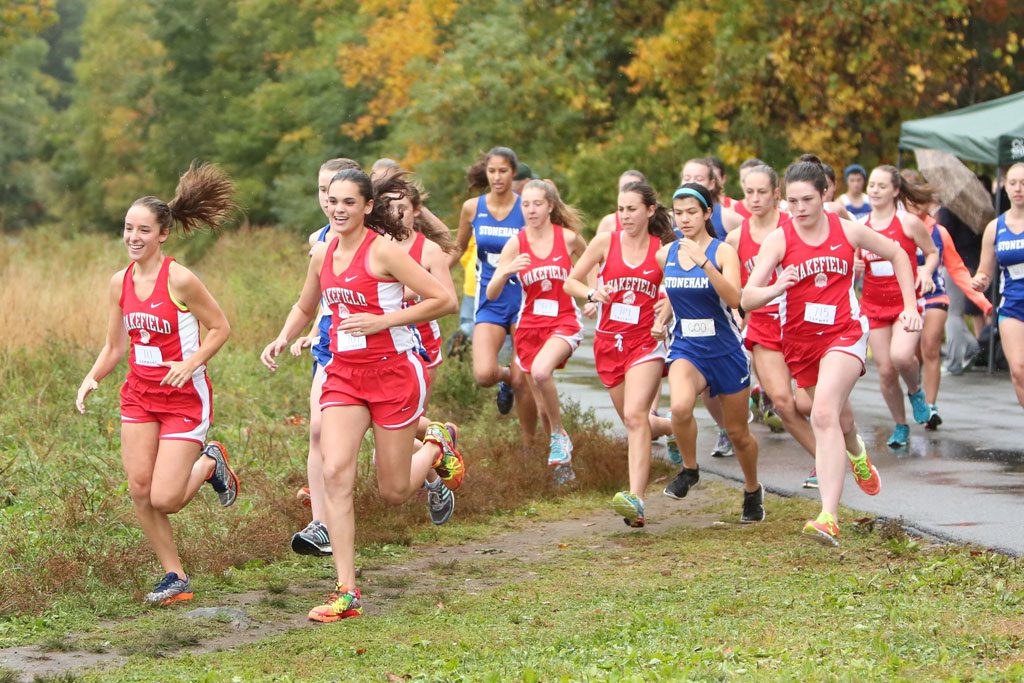 THE WMHS girls’ cross country team captured seven of the top 10 places against Melrose as it prevailed by a 22-39 score in a showdown of unbeaten teams in the Middlesex League Freedom division. The Warrior gained at least a share of the M.L. Freedom division crown with the victory. (Donna Larsson File Photo)

WAKEFIELD — There may be no better club that packs it in like the Warrior girls’ cross country team.

Wakefield used a familiar formula for success and earned at least a share of the Middlesex League Freedom title as it ran past Melrose, 22-39, in a clash of unbeaten teams in the division yesterday afternoon at the Beasley Track and Field Course.

The Warriors increased their record to 4-0 in the M.L. Freedom division (4-2 overall) while the Red Raiders fell to 3-1 in the division and 4-2 overall.

As a result of the win, Wakefield will finish with at least a share of its fourth consecutive M.L. Freedom division. The Warriors still have some unfinished business, however. They need to defeat Burlington in the dual meet finale to win their fourth straight league championship outright. That meet is next Tuesday afternoon in Burlington.

As for yesterday afternoon, Wakefield captured second, third and fourth and then secured the sixth, seventh, eighth and ninth places as it prevailed in convincing fashion. The Warriors have been successful the past three years running in a pack and even nicknamed themselves “the wolves.” That formula for success certainly worked for Wakefield yesterday afternoon.

Melrose’s top runner, Liz Hirsch, won the race in a time of 19:38. However, the next three runners were wearing Wakefield uniforms.

Senior co-captain Emily Hammond gave chase to Hirsch for a while but easily held on to second place and that’s where she finished with a time of 19:53.

Junior Sara Custodio and senior co-captain Lauren Sallade were next with third and fourth place finishes. They posted times of 20:38 and 21:35.

Melrose’s second runner finished fifth in a time of 21:43.

The next four runners were from Wakefield which helped seal the victory for the defending champs. Sophomore Abby Harrington came in sixth at 21:46, sophomore Jordan Stackhouse finished seventh at 21:59, junior Reilly McNamara captured eighth in a time of 22:16 and freshman Gillian Russell took ninth as she clocked in at 22:20.

“We knew this was a huge meet between two undefeated teams,” said Coach Karen Barrett. “This means we have earned a share of the league title. We wanted to win the title for the fourth year in a row and they (the Wakefield) runners showed up to compete.

“I gave them the toughest workouts this past week and they completed them all,” added Barrett. “They wanted it. I said to them before the race, ‘It’s yours for the taking. Now go out there and take it.’ We took two, three, four, six and seven. We worked on closing the gap among our top runners and we did just that.”

Wakefield had nine more runners that competed in the race.

Maeve Conway, a sophomore, finished 12th overall in a time of 22:41. Then senior Joanna Hammond and junior Catherine Urbano claimed 16th and 19th place as they posted times of 23:37 and 24:24.

“This was unbelievable considering we lost four all-stars from last year’s team,” said Barrett. “We wanted to win our fourth straight title and I thought we could do it. We had to go out and do the work, however, to win it. This is Cinderella story. Melrose is a good team and it came down to who wanted it more. The girls trained hard and made it possible.”

The Warriors face the Red Devils next Tuesday afternoon (3:45 p.m.) at the Burlington High School course as they seek to win the M.L. Freedom division title outright.