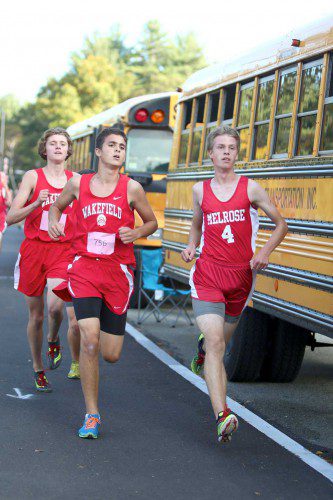 This fall season, the Warriors need no motivation as they seek to bring the league championship back to Wakefield.

Wakefield posted a 5-2 overall record and 4-1 mark in the M.L. Freedom division as it lost a 19-36 decision to decision to the Red Raiders at the Beasley Course to spoil the Warriors’ hopes of a four-peat.

The Warriors are strong in numbers once again with 44 athletes and many of those runners are returning athletes. Also with Melrose fielding a young team last fall, the Wakefield runners knew they had to train hard over the summer to improve their times knowing that the Red Raiders won’t give up the crown without a fight.

“We have a lot of returning kids who ran the 30 to 40 mile range over the summer. Many of them ran in the 50 mile range and even 60 miles per week,” said Head Coach Perry Pappas, in his fourth year. “They are motivated to have a strong season and rebound from last year. They want to bring the league title back to Wakefield. Melrose will have a strong team and they bring back a lot of talent.”

While the Warriors want to have a championship dual meet season, they also want to increase their performance at the state level as well.

“There is a small gap from our one through seven runners which is a good sign for success,” said Pappas. “We want to win the league, but we also want to become front runners in the state meets. I think we can do that based on our workouts the boys did over the summer and the time trials they have run.”

The Warriors well be led by senior captains Alec Rodgers, Jeremy Keegan, and Tyler Whipple. All three are veterans of the sport and have run track during the winter and spring as well.

“They have built up their abilities since they were freshmen and have worked hard to become better cross counry runners,” said Pappas. “They show great leadership and I’m sure these individuals will be running in college somewhere. They want to have a good final season running with the varsity.”

Jack Stevens, a junior, returns and qualified and ran in the Div. 2 All-State meet last November. He is much improved from last year when he finished 23rd in the Div. 4 Eastern Mass. Championship Meet.

Adam Roberto, a first-year cross country runner, is no stranger to distance running having been a member of Wakefield’s league championship indoor and outdoor track teams.

Nick McGee, a junior, is also new to the team having run indoor track.

Ryan Smith, Max Hinchey, and Nolan Collins are three sophomores that out from team for the first time.

“We have 44 kids that enjoy themselves running cross country and they have helped to create the success the program’s had,” said Pappas. “We want to win the league title, but I would take being runner-up if that gave us an opportunity to compete for one of the top spots in the state. We have the depth to do that, but we need to build up our confidence to run a meet against 200 individual runners from 40 different teams. We could have several runners in the top 10 to 15 places.

“We open up against Woburn at Horn Pond,” continued Pappas. “Woburn has two strong runners and it will be good test for the boys. We also have the Frank Kelley Invitational on September 26th where we will run varsity, JV, and freshman teams at the state level for the first time.”

The one thing about Wakefield’s depth is that the runners will challenge each other to become better over the course of the season.

“It’s a long season and in November we can only have seven varsity runners and there are 14-15 individuals battling for those seven spots,” said Pappas.

Wakefield opens up the season tomorrow afternoon at 3:30 p.m. when it will run against the Tanners in a M.L. crossover meet at Horn Pond.