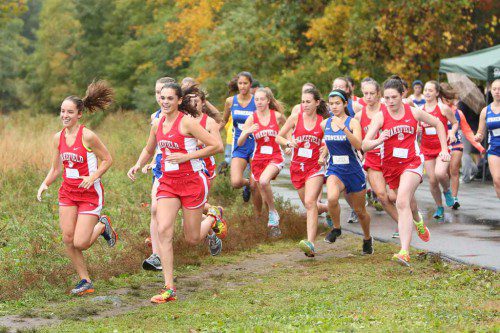 WAKEFIELD — The motto for the Wakefield Memorial High girls’ cross country team this fall is “The drive for five”.

The Warriors are seeking their fifth straight Middlesex League Freedom division championship, and while they did suffer several graduation losses, the potential to continue their dominance in the league is there with the returning runners they have along with several promising newcomers.

Wakefield went 5-2 overall, but more importantly 5-0 in the division, to be crowned league champs for a fourth straight year. The title didn’t come easy for Wakefield as it was involved in several close especially the season finale against Burlington that the Warriors barely squeaked out to win the league championship outright.

“We have 19 girls on the team which is more than I’ve started with before,” said Head Coach Karen Barrett, who returns for her ninth year as head coach. “We also have six freshmen which is good to see. The team goal is to try keep it going with the drive for five. I think we have the potential to accomplish that. But we need everything to go right. We need to work hard and avoid injuries. If we can do that, then it’s possible.”

Wakefield lost three seniors from last year’s team including twin sisters Emily and Joanna Hammond as well as Lauren Sallade. The rest of Wakefield’s top runners from a year ago back.

The senior co-captains are Sara Custodio and Reilly McNamara. Custodio was a M.L. Freedom division all-star last year while McNamara is a returning veteran and was mong Wakefield’s top seven.

Two more seniors return and they are Sam Ross and Catherine Urbano.

The returning juniors include Jordan Stackhouse, Cassie Lucci, Abby Harrington, and Maeve Conway. Harrington was a league all-star last year. All ran well for the Warriors and several of them were among the top group of runners.

Wakefield has four sophomores who return this fall. They are Emmalee Connors, Sarah Filleul, Kate Lynch, and Gillian Russell.

The are six freshmen on the team and several have shown great promise so far. The ninth graders are Isabella Kehoe, Nicole Lima, Claudia Norden, Emily Norton-Hughes, Katie Sylvia, and Amanda Westlake.

“This is my 18th year coaching cross country (as an assistant and head coach) and this was the first time that we had four freshmen that finished on our home course the first time they ran it,” said Barrett.

While the influx of freshmen is nice, the Warriors are going to rely on their veterans to defend their crown.

“The veteran runners have worked hard. We have four solid girls right now, but we want to close the gap between them and the fifth and sixth runners,” said Barrett. “We would like to get them closer to the top four. Winning the league title is doable. The potential is there, but it will not be easy.

“I know the top runners coming back in the league unless anyone has a new freshman that is going to stand out. Of course, we’ll know soon enough,” added Barrett. “We have a chance of winning our fifth title, but everybody needs to show up at practice everyday and work hard. We know we are going to have some tough meets. I don’t think there is one dominant team, so everybody is on an even playing board.”

The Warriors have three home dual meets and three away meets. However two out of three road meets are M.L. crossover meet against teams from the Liberty division and will not count towards the Freedom division title.

“We like to run on our home course and it is great for the spectator. Other teams don’t like it so much,” said Barrett. “That is a great advantage for us. I’m very happy with the workouts. In cross country, if you continue to work hard and give 100 percent, you are going to get better.

“The big thing is that the runners have to want it to happen,” continued Barrett. “It would be a great honor if we are able to win five in a row. The upperclassmen are excited. They want to get it done.”

The Warriors open up the season tomorrow afternoon at 3:30 p.m. when they run against Woburn in a M.L. crossover meet at Horn Pond.