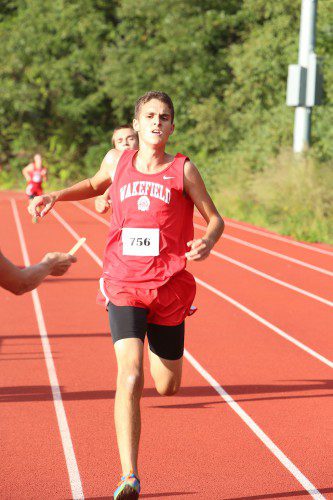 RICH CUSTODIO, a senior, came in fifth overall in a time of 16:59 in Wakefield’s 25-34 win over Watertown yesterday afternoon at the Beasley Track and Field Course at WMHS. (Donna Larsson File Photo)

Wakefield posted a 25-34 victory over Watertown yesterday afternoon in the league finale at the Beasley Track and Field Course at Wakefield Memorial High School to finish with a 4-1 record in the division.

The boys faced off against a few strong runners from Watertown but was able to use their depth again to come away with a victory. Watertown took the first two spots but then the Warriors secured the next five places.

Senior Alec Rodgers had the best time of his high school career on his last time running at home. Rodgers clocked in at 16:23.

Richie Custodio, a senior, placed fifth with a time of 16:59.

Senior Chris Skeldon was sixth with a time of 17:00.

Watertown’s third runner took eighth place followed by Wakefield in the next 13 spots.

Adam D’Ambrosio placed 10th and continued his much improved season with another personal best time of 17:34 to cap off his last chance at home as a senior.

“It’s good to see so many improvements from top to bottom,” said Coach Perry Pappas. “The past few workouts have gone very well and the boys are at their strongest going into the postseason.”

Wakefield also had some good performances from its JV runners as well.

The Warriors head to the Twilight Invitational this Saturday on Cape Cod to compete against some of the best teams in the state. After that Wakefield will take on Lexington in a crossover meet against the M.L. Liberty division power on Tuesday, Oct. 27 at 3:30 p.m. at the Lincoln Park Course in Lexington.