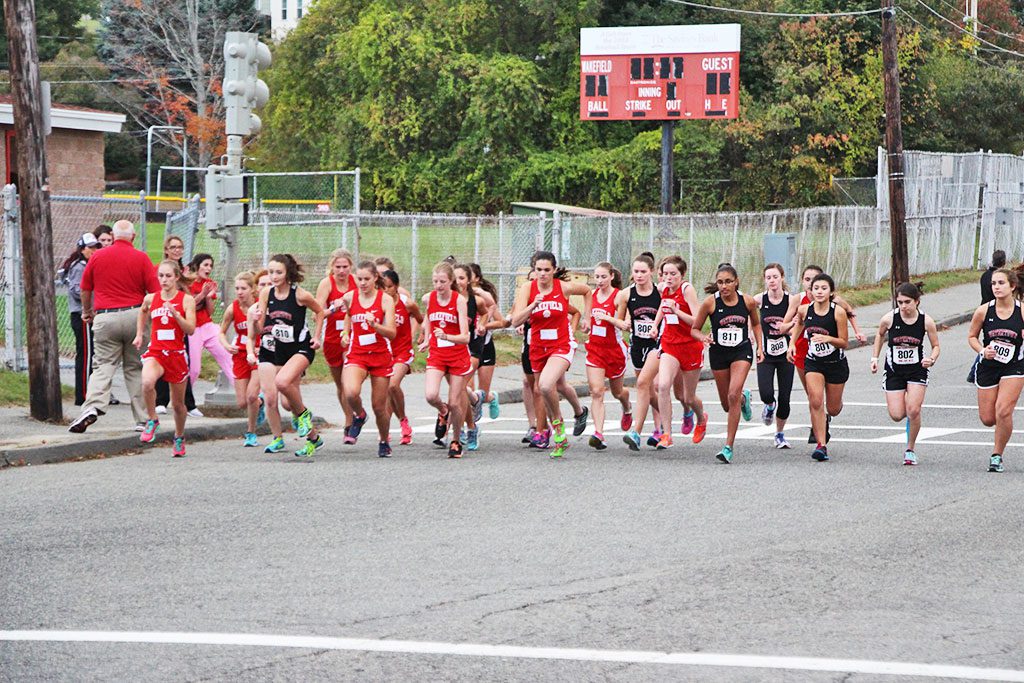 THE WARRIOR girls’ cross country team as a whole ran terrific and posted personal best times in its meet against Watertown at the Beasley Track and Field Course at Wakefield Memorial High School. The Warriors won 20-43 to win their fifth straight league title.

WAKEFIELD — The Drive for Five is complete.

The Wakefield Memorial High girls’ cross country claimed the Middlesex League Freedom division championship outright with a 20-43 triumph over Watertown yesterday afternoon in the league finale at the Beasley Track and Field Course at WMHS.

Wakefield finished the league portion of its schedule with a perfect 5-0 record and won its fifth consecutive M.L. Freedom division title to complete one of its season goals.

“(The) Wakefield girls were simply spectacular today. They did not want any part of sharing the title. We have worked so hard all season and it certainly paid off,” said Coach Karen Barrett. “I am so proud of everyone on my team. Winning the league title five years in a row is such a tribute to my hard-working, dedicated girls.

“I knew we had a good chance today but I never thought we would get such a decisive win,” continued Barrett. “The girls were ready from the time the gun went off and never looked back. As a coach, I have so much admiration for the improvement my girls showed today. Our whole team ran a personal best time. We definitely wanted it more today.”

Junior Jordan Stackhouse was first for the Warrior team and second overall as she ran like a true veteran. She has been amazing this season said Barrett. Her time of 20:15 was a huge PR for her. Stackhouse also led a pack of Warrior runners.

Abby Harrington, a junior, ran the best race of her career with a time of 20:50, another big PR. Harrington came in fourth in the race.

Freshman Amanda Westlake was next in sixth place with a PR time of 21:08.

Cassie Lucci, a junior, had a big PR as she clocked in at 21:29 for seventh place in the meet.

Senior Reilly McNamara finished off the varsity squad as she took eighth overall with a PR time of 21:53.

“As a coach, I cannot ask for anything better than what they gave me today — a win and all personal bests,” said Barrett.

There was no let up with the JV squad. Every one of them improved immensely said Barrett.

Katie Lynch had another big PR clocking in at 22:48.

“What a fantastic day for our girls. I am extremely proud of the effort they all put forth today,” said Barrett. “I loved seeing the smiles on all of their faces after we won. It is extremely fulfilling as a coach. We will be working hard to compete in the league meet at the Woburn Country Club.”

The league meet will be held the first week in November. But first the Warriors will have a crossover meet against M.L. Liberty division power Lexington. That meet will held on Tuesday, Oct. 27 at 3:30 p.m. at the Lincoln Park Course in Lexington.