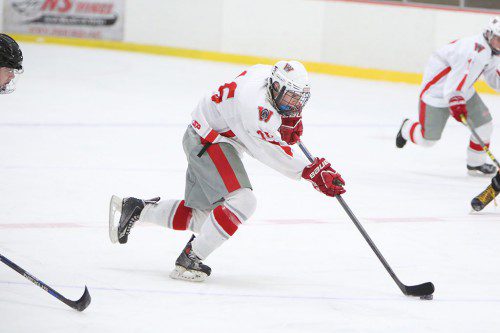 WAKEFIELD — A change in venue may just help the Warrior boys’ hockey team this season. Of course returning the majority of last year’s team should be a big boost as well.

Wakefield has moved out of the Kasabuski Arena and will be playing its home games between the Stoneham Arena and Ristuccia Arena in Wilmington this winter. While the Warriors are welcoming the change, they still need to work hard to improve in all aspects of the game if they want to better their 4-13-3 overall record from a year ago.

“We’re very excited about the season and we’re exited to be playing our home games at the Stoneham and Ristuccia arenas,” said Coach Chris Gianatassio, in his second year as head coach. “Our goal is to make the state tournament. Wakefield hasn’t been in the state tournament since 2013. Our senior class has never been to the tournament and we want to get back there.”

To finish .500 and make the postseason, Wakefield will have to perform well in the Middlesex League which is one of the strongest public school leagues in hockey in the state. Wakefield finished with a 1-13-2 record in the M.L. Freedom division a year ago.

“We were in a lot of one goal games. We need to win those tight games this year to make the state tournament,” said Gianatassio. “We play in the best public school league in the states and there are no nights off. We need to play our best every night.”

The Warriors’ strength is in goal and on defense where they return two goalies and a host of defenseman. Wakefield has 17 returning players total.

Wakefield scrimmaged Natick and dropped a 2-1 game and then beat Gloucester 6-4 in its second scrimmage. The Warriors’ final preseason scrimmage was this past Saturday against Northeast Metro Tech.

Tyler Pugsley, a junior, returns to play goal. As a sophomore, Pugsley played 27.2 periods, had a 3.31 GAA, and an .885 save percentage. Pugsley logged the most minutes of any of Wakefield’s goalies a year ago.

Justin Harding, a sophomore, is the newcomer in goal for Wakefield.

“Our goaltending and defense will be our strongest point,” said Gianatassio. “We have a lot of experience in net and on defense with the players we have returning. At forward, we are going to need our upperclassmen to step up.”

The returning forwards include senior co-captains David Melanson and Pat Leary. Melanson had 17 points and was tied for the top spot in scoring, while Leary had two goals and two assists for four points.

Pat Roche, a junior, returns along with sophomores Tom Harrington and Dan Guarino. Harrington had 11 points with two goals and nine assists.

There are three newcomers at forward as well with senior Dan Veerman, sophomore Anthony Forziati, and freshman Cam Souza. Forziati is a transfer from Pingree.

Funicella, a forward, was tied with junior forward David Melanson in points with 17. Funicella scored eight goals and assisted on nine goals.

Yandell played in goal and played 21.8 periods with a 3.99 goals against average. He had a save percentage of .869.

“We had 40 kids try out which means the program is growing,” said Gianatassio. “I think that the interest is there with the middle school team.”

Wakefield’s also had a few changes on the coaching staff. Mike Manfredi and Mike O’Brien will now assist Gianatassio with the varsity. The new JV head coach is former Warrior goalie Chris Czarnota. He will be assisted by Mike Fitzpatrick.

Gianatassio also wanted to mention a couple of events coming up that the Warriors are excited about. One is Youth Hockey Night on Thursday, Dec. 29 when Wakefield hosts St. Peter Marian at 6 p.m. at the Stoneham Arena. The other is an Alumni Game on Friday, Dec. 30 at 8 p.m. at the Ristuccia Arena.

Wakefield opens up the season tomorrow night at 8 p.m. when it hosts Lexington at the Ristuccia Arena.