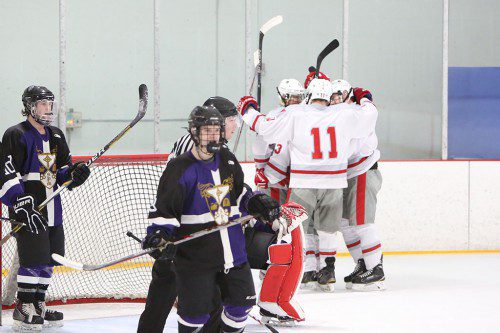 SEVERAL WARRIOR players, including senior defenseman Ben Coccoluto (#11), celebrate after one of the seven goals scored against St. Peter-Marian. Coccoluto scored a goal and had two assists in Wakefield’s 6-2 win over Beverly on Saturday as the Warriors won their second game in a row. (Donna Larsson File Photo)

STONEHAM — The Wakefield Memorial High School varsity boys’ hockey team won its second straight game on Saturday as it rode the wave of momentum generated by its first win into a 6-2 victory over Beverly at the Stoneham Arena.

Against St. Peter-Marian, the Warriors netted 7 goals en route to their first win. Coach Chris Gianatassio was pleased to see his team play three full periods of hockey. He didn’t feel the same way about the first period of Saturday, as the Warriors skated to a 0-0 score heading into the first intermission against the Panthers.

“(In the) First period we started off pretty slow, then the second period we really picked our game up to a level we wanted to play,” the coach said after the win.

Coach Gianatassio challenged his players to step up, and they responded in a big way. Just 12 seconds into the second period, Braeden Langlois fed Sean McNall, who lit the lamp for the first goal of the game. It was McNall’s fourth goal over the past two games.

“(In the) Second period we elevated our game. We challenged some of the players at the start of the second period and they stepped up,” Gianatassio said.

Beverly was able to regroup and get a goal back with 3:36 to play and it looked like it would be a 2-1 score heading into the third period. However, the Warriors played out the entirety of the 15 minutes of the second period, and with 15 seconds on the clock, Ben Coccoluto scored to make it 3-1. The goal was the first of his varsity career.

After an icing brought a face-off to the Warriors defensive end with 5.7 seconds to play, it looked like 3-1 would be the score going into the third. Incredibly, Melanson won the face-off cleanly and bolted down the ice, beating Beverly goalie Troy Doyle as the horn sounded, giving the crowd a jolt and the Warriors an unexpected 4-1 lead.

“It was a great way to end the period, He (Dave Melanson) really stepped up, it was a huge play to get us in the locker room at 4-1. It really set the tone for the third period,” said Gianatassio.

The Warriors held a 4-1 lead deep into the third period. Their offense stagnated as they had to kill off a pair of penalties. It wasn’t until just under five and a half minutes to play that Coccoluto found Anthony Forziati to make it 5-1.

Forziati added a second goal, an absolutely beautifully skillful bit of stick work, produced by tremendous individual effort gave him the space, to make it 6-1 with 51 seconds left to play.

“Anthony had a highlight reel goal,” Gianatassio said of the sophomore Forziati. “He’s been making plays all year and we’ve been seeing him progress. It was well deserved because he was buzzing all night. He had two goals and one assist, so he had a really good night. He’s been one of our leaders as a sophomore so it’s nice to see that.”

The underclassmen have performed well in the early going for the Warriors and Coach Gianatassio is excited by what he’s seen.

“We have an excellent sophomore class and a very good freshman class,” he said. “We’re excited to watch them develop as players and continue to watch them get better and better with every game.”

Wakefield was in cruise control, and senior goalie Nick Porter was well on his way to his first varsity win for the Warriors.

Beverly got a goal back with 35 seconds to play to make the final score a little closer with Wakefield coming out on top, 6-2.

“We’re happy overall,” said Gianatassio about the result. “We have to enjoy every win, but we have Stoneham on Wednesday. So we have some league games coming up and it’s going to be a challenge.”