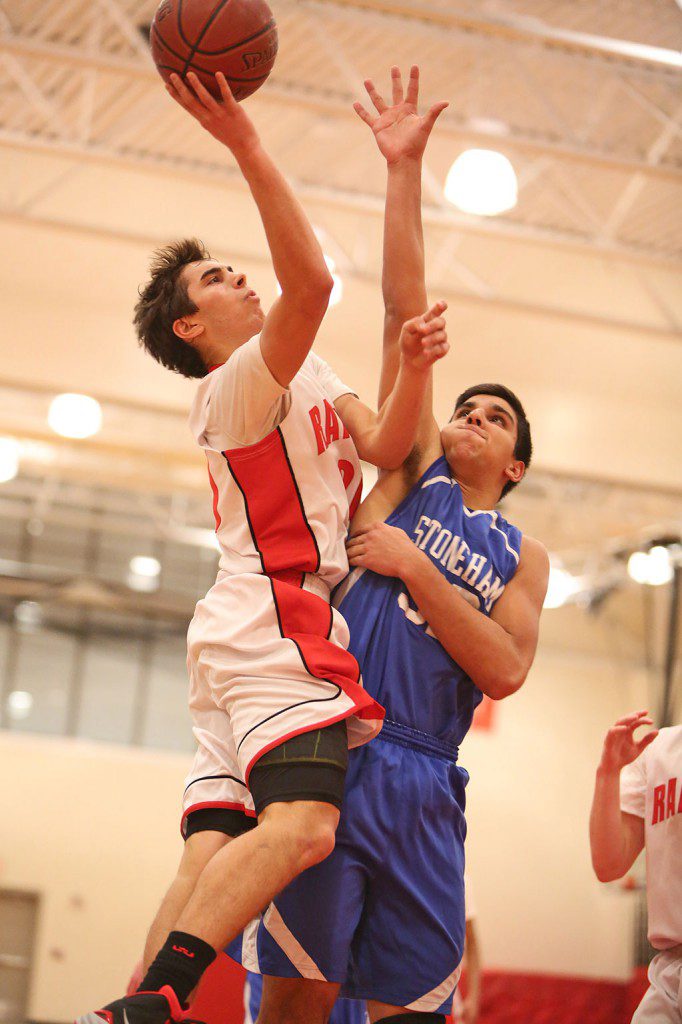 MELROSE — After suffering a 2-4 start to the season the Melrose Red Raider basketball regained ground thanks to a collection of Freedom League wins over rivals Wilmington, Stoneham and Burlington last week. Their one blemish on the schedule was a closely fought 62-59 loss to Wakefield on the road Tuesday night at Charbonneau Field House.

At 4-3 in the Freedom League Melrose started their division play with a key win over Burlington last Friday night and a buzzer-beater victory over Wilmington on Jan. 6 to right the ship into the winning column.

Against Wilmington (3-3) the Raiders took a 46-44 gripping victory that came down to last possession. Melrose senior Anthony Gilardi led in scoring with 18 points while sophomore guard Tamari Mercer had 12 points, five assists and a crowd pleasing half court shot to close the half. All hands were on deck, with Julian Nyland (eight points) and Chris Pizzotti delivering key steals that turned the tide against the Wildcats. That was followed up four days later on Friday when they faced Burlington and walked away with a 68-41 blowout. They were led by seniors Colby Andrews (20) and Anthony Gilardi (19) in scoring.

On Tuesday, Melrose allowed a four point advantage with just over a minute to go slip through their hands and the result was a 62-59 loss against the Wakefield Warriors at Wakefield High. The loss came despite a terrific 25 point effort from Melrose senior captain Colby Andrews and a sly and diligent game from Julian Nyland (12 points, five steals), whose strong foul line performance gave Melrose a four point lead they couldn’t maintain in the final minute of the game. Melrose chased points for most of the contest, after taking a 2-0 lead they fell to deficits of 14-6, 20-16 before tying it up at 21-21 and 26-26 before the half. Melrose struggled with turnovers most of the night and at the end of the third fell 40-37. Wakefield simply out-shot Melrose throughout the night, with most of the work coming from Warrior Brian Dickey (21 points) and John Miller (13 points) whose three-pointer cut Melrose’s lead to one point at 59-58, with just over a minute left in the fourth quarter. Things flipped for the Red Raiders when a pass went out of bounds, turning over possession, and leading to Warrior’s Dickey shooting a layup plus foul that turned the tide permanently at 61-59.

At press time, the Middlesex League is completely up for grabs, with most teams hovering just over the edge of .500. If Melrose would like to remain on top of the league they’ll have to  fend off Watertown (4-3) whom they play this Friday night on the road at 5:30 p.m.