Raider wrestlers on the winning side

MELROSE—With one of the most challenging schedules of all winter sports at Melrose High School, the Melrose Red Raider wrestling team has carved out a winning 8-7 overall record thanks to a solid collaborative effort from the team since the start of their season in December.

There have been plenty of surprises as the season has progressed, with a strong heavyweight and freshmen class emerging, not to mention, a workhorse-like performance from their senior squad. 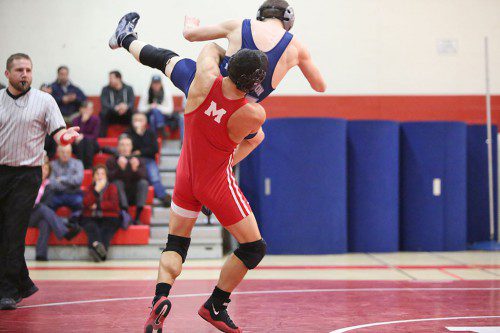 CHRIS REALE is among those hard hitting Raiders who are leading the MHS wrestling team in a winning campaign. (Donna Larsson photo)

“I think, just like last season, we tend to surprise people,” says head coach Jim Bleiler. “We’ve been playing without [current state champ] Ryan Stanton, so we’re giving up 12 or more points every meet, so this team has stepped up.”

Among those who have turned heads this season is junior Nick Disley, the team’s heavyweight who is taking out the competition. “He’s been a great surprise this year and a great addition to the team,” says his coach.

Senior captain Mike Doucette gave plenty of notice in 2014 when he took third at States. This season look for him to go even further. At 182 lbs Doucette is wiping out competition, including over the weekend of January 10th when he beat a tough competitor from Sandwich. “He just laid into him,” reports his coach.

Bleiler points out the strong efforts by his experienced wrestlers, including  Matt Parker, Antonio DiFronzo and Jessie Gauvain. “All three have come up with big wins to help fill in the gap.” Such was the case at Melrose’s January 3rd quad-meet against Greater Lowell (45-33), Acton-Boxboro (45-27) and Holliston (51-21). Melrose swept the day, 3-0, in what was their best performances of the season.

Part of that success also comes from a number of freshman who have joined the team and have hit the mat running. Mike Calvert (126 lb) and Cam Rosie (132 lb) have seen wins this season  against some pretty stiff competition. “They wrestle back to back and are doing an unbelievable job. I’m very impressed,” says Blieler.

On Saturday, Melrose will host another meet at the Marcoux gym at Melrose High School at 10:00 including competition from Triton and Lynnfield-North Reading.