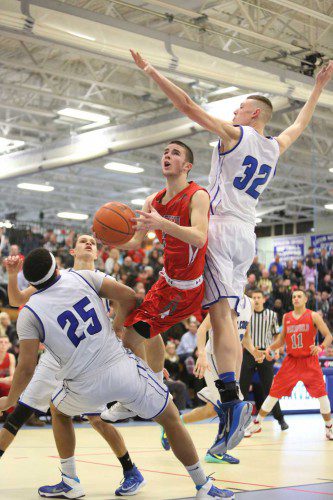 SENIOR GUARD Brian Dickey (middle) goes up for a shot in traffic against Danvers players Devonn Allen (back), Devin Harris (#25) and Peter Merry (#32). Dickey netted 11 points in Wakefield’s 69-52 loss against the Falcons in a Div. 2 North first round contest on Friday night at Danvers High School. (Donna Larsson Photo)

DANVERS — Top-ranked Danvers’ inside game has developed quite a reputation in Eastern Mass. with senior center Peter Merry, who stands at 6-9, leading the way. However the Falcons’ outside game, particularly their three-point shooting, is very good as well.

Danvers’ accuracy behind the three-point arc made a huge difference in a Div. 2 North first round game against the Wakefield Memorial High boys’ basketball team on Friday night at the Danvers High Field House. The Falcons made nine three-point shots, five of which came in the first quarter, as they handed the Warriors a 69-52 defeat to end Wakefield’s season.

Wakefield ended the year with 10-10 record while Danvers (22-0) advanced and will host a quarterfinal game tonight at home against Latin Academy.

On Friday night before a packed house, including many Wakefield fans, the Warriors jumped out to a 4-0 lead. But once Danvers found its range from three-point land, the Warriors behind quickly and never led in the contest again. Danvers opened up a 23-14 lead after the first quarter.

Leading the way for the Falcons was sophomore point guard Devonn Allen who netted a game high 23 points including three treys.

“They’re as good as advertised,” said Coach Brad Simpson. “We went to a man-to-man defense against to guard again them hitting the three-point shot. But they made seven in the first half. I thought we did a very good job defending their big men.”

Merry was held to eight points, while forwards Devin Harris and Mike Nestor were held to 11 points and five points, respectively.

But it was Allen that was the difference in the game.

“We knew he was good but our scouting report had number 21 (Vinny Clifford) listed as the player to watch out for,” said Simpson. “Allen took over the game because I thought we did a good job on 21.”

Clifford had 10 points including two three-pointers.

Dickey made a field goal but missed a free throw to give Wakefield the early lead. After a basket by junior forward Jon Miller, the Warriors held a 4-0 advantage with 6:29 left in the first quarter.

But Danvers answered with an 8-0 run to take a lead it never relinquished. Nestor canned a three-pointer and then Merry dunked the ball. Senior guard Rashad Francois (12 points) came off the bench and sank a trey with 4:32 left in the first.

Calnan made a jumper 16 seconds later but the Falcons netted three straight trifectas to open up a 17-6 advantage with 2:42 left in the period. Allen canned two treys and Clifford hit the other.

Wakefield got a nice spark off the bench from senior MJ Urbano (eight points) as he came in and netted a three-pointer.

Merry made one of two free throws before Calnan was fouled from behind the arc. Calnan made all three foul shots to cut the lead down to six points, 18-12, with 53.8 seconds left. Allen made a three-point play with field goal and free throw and Harris scored a transition basket after a Warrior turnover.

Junior guard Corey Imbriano drove the baseline for a basket for Wakefield as the Warriors trailed 23-14 after one quarter.

The second quarter proved to be the decisive frame as the Falcons outscored Wakefield, 17-5, and take a 40-19 lead into the locker room at halftime.

Harris made one of two foul shots on Auld’s second foul. Clifford then canned a trey. After Allen missed the front end of a one-and-one, Harris again was 1-for-2 from the charity stripe. Allen then made a layup and sank a trifecta as the 10-0 run to start the second quarter resulted in a 33-14 lead for the Falcons.

Beck (eight points) made a layup with 3:23 left in the second quarter for Wakefield’s first points of the frame after several turnovers and missed shots. Allen sank two more foul shots and then Calnan drained a trey to cut the lead to 35-19 with 2:56 left.

Clifford was fouled going to the basket and Auld was slapped with a technical foul. Clifford made one of two free throws on the technical and Danvers was awarded possession of the ball. Allen was fouled and he made both three throws. Francois tipped in a basket with 6.7 seconds left as the home team had a 40-19 lead at the break.

The Warriors had a chance to make a dent into the Danvers lead to begin the third quarter but went only 1-for-5 from the free throw line. Calnan missed a pair of foul shots, Dickey made one out of two and Beck missed the foul shot and a chance to compete a three-point play.

Clifford was fouled hard and knocked to the floor by Auld who was slapped with a second technical foul and had to leave the game. Clifford sank one of the two foul shots. Harris then completed a three-point play with a basket and field goal. On Danvers’ next trip up the floor, Harris was fouled and he sank one of two foul shots as the Falcons opened up a 45-22 lead with 4:58 left in the third.

Beck made a layup but then Francois sank a trey and Clifford made a runner to give Danvers a 50-26 lead.

Merry made one of two foul shots and Allen sank two more free throws. Dickey canned a trey with 14 seconds left and Francois got one to fall before the buzzer as the two teams each scored 17 points in the period. Danvers led 57-36 after three.

The Warriors scored the first seven points of the fourth quarter to cut the lead down to 14 points, 57-43, with 6:32 left. Calnan made a jumper, Dickey canned a trey and then Calnan cut in from the backside to make an easy basket.

That was as close as the Warriors got as Merry got a hook shot to fall, Allen recorded a layup and Francois had a steal and a layup to put Danvers back up by 20 points, 63-43, with 5:12 left.

Harris made a trey, Danvers’ ninth for the game, before Calnan sank one of two foul shots. Francois hit two free throws, Calnan recorded a trifecta and Allen made one of two free throws as both teams emptied their benches for the final 2:17 of the game.

“I’m proud of my team,” said Simpson. “We played well over the first three or four minutes and we led. They hit the five three-pointers in the first quarter and it hurt us. I thought we got on a little bit of roll in the second half and had a little bit of comeback. My senior guards, Chris Calnan and Brian Dickey, played well. Tighe Beck made some baskets and MJ Urbano gave us a nice lift off the bench. We never quit but every time we went on a run, Danvers answered.”