Wensley scores an All-State title at the 195 weight class 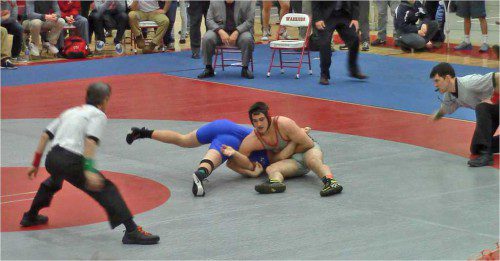 DAN WENSLEY, a senior (right), captured the 195 weight class in the All-State meet over the weekend. Wensley is only the second Warrior wrestler to accomplish the feat.

SALEM — Only two wrestlers in Wakefield Memorial High School history have captured All-State titles and senior Dan Wensley is one of the two.

Wensley captured first place at the 195 weight class in the All-State meet which was held on Friday and Saturday at Salem High School.

Wensley is only the second Warrior in school history to win an All-State title and the first since James D’Ambrosio accomplished the feat in 1995.

The senior posted a 4-0 record for another championship to go along with his first place finishes in the Div. 3 North meet and the Div. 3 state meet.

Wensley pinned Joey Byers of Salem at 55 seconds in his first match. He then pulled out a 6-2 decision over Haverhill’s Luc Creitien and a 5-1 decision over Wellesley’s Thomas Nocka. In the final, Wensley scored the only point in a 1-0 decision over Framingham’s Jake O’Brien.

Wensley, a senior captain, will be moving on to the New England championship meet this weekend in North Andover.

The Warriors had two more representatives in the All-State meet over the weekend. Sophomore Jack Spicer competed at the 106 weight class and senior Alex Kane wrestled at the 220 weight class.

Spicer finished in eighth place and is an alternate for the New England championship meet. The sophomore posted a 2-3 record for his eighth place showing.

Spicer dropped his opening bout as he was pinned by Southeast Regional’s Brett Wordwell at 44 seconds. The sophomore then rebounded with two victories. He pulled out a 10-6 decision over Sabis Charter’s Christian Garcia and then a 5-2 decision over Hingham’s Wes Ward.

The sophomore then lost by pin to Lowell’s Ricky Paulido at 1:35. In his final bout, Spicer faced Wordwell for a second time and lost by pin to the Southeast Regional wrestler at 1:27.

Kane, a senior captain, went 1-2 and did not place. All three of his bouts went into multiple overtimes.

Kane wrapped up his career with 152 wins and two Div. 3 state championships.