Takes on top-seeded Danvers tonight in a Div. 2 North first round contest 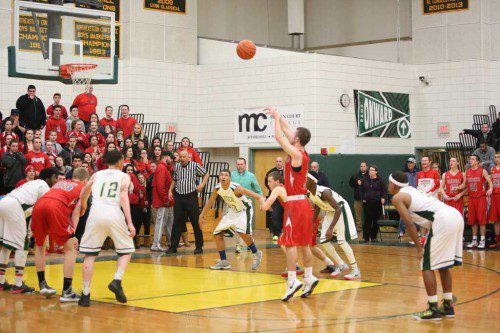 SENIOR GUARD Brian Dickey takes one of his free throws during crunch time in Wakefield’s 49-46 triumph over Lynn Classical on Monday in a Div. 2 North preliminary round game. The Warriors will be looking for another clutch effort when they take on top-seeded Danvers tonight in a first round game at Danvers High School. (Donna Larsson File Photo)

DANVERS — The New England Patriots entered Super Bowl XLII against the New York Giants undefeated and one win away from a perfect season. Most New England sports fans know what happened in that game.

The Wakefield Memorial High boys’ basketball team is hoping for a similar result in its Div. 2 North first round game against undefeated Danvers tonight at Danvers High School. Tip-off is at 7 p.m.

The Warriors (10-9) are seeded 17th in the Div. 2 North field and already have a tournament win under their belts after their 49-46 triumph over Lynn Classical on Monday in a preliminary round contest. Meanwhile, the Falcons are a perfect 21-0 and are the top-seeded team in Div. 2 North.

“They’re the number one seed and they’re undefeated. They won the Comcast Tournament last week,” said Head Coach Brad Simpson. “They have seasoned veterans and they have a good coach, John Walsh. They played a good schedule in the Northeastern Conference. They played teams like Lynn English, Lynn Classical, Beverly and Marblehead. They also played a challenging non-league schedule.

Wakefield clearly is not the favorite to win and it has no pressure on it. Meanwhile, the expectations are high for the Falcons. The Warriors are hoping to go out and play one of their best games of the season. If they do that, then anything is possible.

“They have excellent size,” said Simpson. “We’ve played pretty well the past six or seven games. The only game where we didn’t play well was at Belmont.”

Danvers is led by senior center Peter Merry who stands at 6-9. Merry is very athletic according to Simpson and runs the floor well. The senior also protects the rim well and is a good shot blocker.

Senior Devin Harris stands at 6-5 and is a power forward. Harris, an all-scholastic, is good low post player and he finishes very well inside. He is a good free throw shooter as well.

Vinny Clifford, a senior, stands at 6-3 and he is the shooting forward. Simpson describes Clifford as the best spot up shooter in the Northeastern Conference. He has great range and has posted some big offensive nights for the Falcons.

While the front court is terrific, the back court is very talented as well led by senior guard Rashad Francois. Francois, who is 6-2, may very well the best athlete on the team said Simpson. Francois runs and jumps very well. He also had quick hands and feet. The senior is the best defender on the Falcons. He is good off the dribble and can hit the occasional three.

The point guard is sophomore Devon Allen, who is 6-0. Allen is the most improved player on Danvers’ roster and he came on strong for the Falcons later in the season. Allen, who came off the bench earlier in the year, has moved into a starting role.

“He might just be the missing piece for them,” said Simpson. “He is a game manager and he plays a good offensive game. He tries to get the ball in other player’s hands. But if you leave him alone, he can hurt you by taking the ball to the basket. He was the MVP of the Comcast Tournament.”

The Warriors turned away the Rams the other night by three points. The only common opponent is Salem which Wakefield lost to by a 58-56 score in December in the Malden Holiday Tournament.

“I think Monday’s win was a confidence builder for us,” said Simpson. “I said on Monday night that our reward for winning that was facing Danvers. Beating Danvers will be tough but I think the kids would rather be playing this game instead of sitting around at home. As you move on in the tournament, you have to play the best teams. To be the best, you have to beat the best teams to keep going.”

Wakefield will try to pull off the upset of the tournament. If the Warriors prevail, then they play a quarterfinal game on Sunday against Latin Academy which defeated Masconomet by a 60-55 score in a first round game last night in Topsfield. Sunday’s contest will be at a time to be announced at Latin Academy if Wakefield wins.