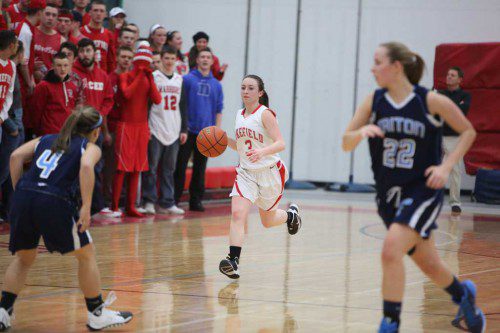 AMANDA BOULTER, a senior guard (#3), led all Wakefield scorers last night with eight points including two three-pointers. Wakefield, which defeated Triton on Tuesday night in a first round game at the Charbonneau Field House, had its season ended by Pentucket in the quarterfinals by a 61-35 tally. (Donna Larsson File Photo)

WEST NEWBURY— When the Div. 2 North pairings for the girls’ basketball tournament were done last weekend there the top two ranked teams were Watertown and Pentucket.

Wakefield drew the seventh seed and earned a second round date with the Cape Ann League Champion Sachems for Thursday night at Pentucket Regional High School by beating Triton in the first round earlier this week.

It’s been nearly a decade at least since the Warriors advanced beyond the first round in the tournament and, in the quarterfinal round, they were billed as huge underdogs. The Sachems came in with a 21-1 record this season, earning them the right to host the game.

They proved why they were so highly touted as the Warriors struggled to find any rhythm offensively in the first half against Pentucket’s pressure defense. Wakefield managed to score just 11 points after two quarters. In the end the Sachems knocked out the Warriors, 61-35, last night.

The gymnasium at Pentucket Regional High School is small, old and the heat was cranked up, way up. Add in a sizable crowd from both sides, the Warriors fans traveled over half an hour to support their team and the temperature made even just watching the game uncomfortable.

Some people even talked about the old Boston Garden and referenced Game 1 of the 2014 NBA Finals in San Antonio, when the cooling unit famously failed at the AT&T Center last June in the Texas heat and led to the demise of the Heat from Miami.

Fortunately for Warrior head coach Meg O’Connell, her players handled the high temperatures better than the pros last summer. It was the Pentucket defense that gave her team issues.

“Credit the Pentucket defense,” said the coach after the game. “They’re a great team, they’re experienced.”

Pentucket came as advertised and its leader, senior point guard and captain Kelsi McNamara took control of the game from the very beginning. She had 21 points in the game, including three three-pointers, two of which came on the first possession of the first and second quarters.

The Warriors struggled to make shots from the field. Gabrielle Joly and Jillian Raso accounted for the only two field goals for the Warriors in the first quarter.

In the second quarter, Raso had a three-point play after an offensive rebound and a layup. Amanda Boulter made a nice move to beat the defender with the dribble drive and made the scoop shot. Grace Hurley had the other two points for the Warriors and at the halftime break they were looking at a 25 point deficit down, 34-9.

“There’s two ways to come out of that,” O’Connell said., “And these girls came out fighting.”

The Warriors never gave in and dug deep to try to spark a comeback in the second half.

After the game coach O’Connell said, “I’m so proud of them. They played hard, they never quit. They have nothing to shake their heads about. They never quit but I knew they never would, we haven’t quit all year.”

Daniella Iannuzzi got the first bucket of the third quarter as the Warriors looked to turn it around on offense. Colleen Jameson came down and stuck one of her three three-pointers to put momentum right back in favor of Pentucket.

The Warriors and Sachems tied the third quarter, 11-11. Boulter had a three-pointer, Mia Joyce had two free throws, and Joly had a couple of good back door cuts that led to easy layups to account for the Wakefield’s scoring.

The Sachems matched the Warriors production and maintained their 25 point lead heading into the final quarter.

In the fourth quarter, Wakefield continued to score but still couldn’t find a way to prevent Pentucket from getting hoops.

Boulter had her second three of the game go down, Iannuzzi had four points in the quarter and Raso went 2-for-2 from the line. But it was too little too late.

Julia Filippone and Olivia Dziadyk had baskets toward the end of the game as well.

Pentucket had three players score in double figures and one player score nine. Its offensive production and defensive pressure should allow them to make a legitimate run at the state title.

For the Warriors, seven players suited up for WMHS girls’ basketball for the final time. Playing their final game for the Warriors were Boulter, Iannuzzi, Nicole Galli, Raso, Alyssa Rossino, Filippone and Mackenzie Collins.

“We have nothing to hang our heads about,” O’Connell said.

The girls can hold their heads high as they  proudly represented their school and their town all year and produced one of the more exciting and successful seasons in recent memory in girls’ hoop.