WILMINGTON — In the game of basketball, a player can’t score if he doesn’t have the ball. 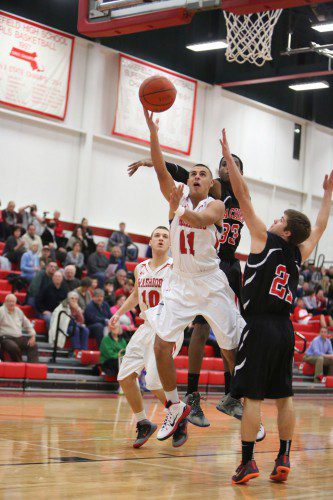 The Wakefield Memorial High boys’ basketball team did its best to limit the touches of Wilmington center Connor Bennett and it worked just enough for the Warriors to emerge with a thrilling 49-48 triumph on Friday night at the Wilmington Middle School.
Wakefield increased its record to 8-7 overall and 8-5 in the Middlesex League Freedom division. The Warriors are now one victory away from clinching a state tournament berth with three more league games remaining.
Wakefield’s makeup game against Belmont, scheduled for tonight, has already been postponed and rescheduled for Thursday night at 7 p.m. at Belmont High School.
The Warriors fell behind 48-46 with about a minute left. On the ensuing possession, senior guard Chris Calnan (a team high 20 points) made a move off the dribble and sunk a 12 foot jumper to tie the game at 48-48.
Wakefield then took a timeout to sent its defense and Wilmington took one of its own after it had brought the ball up the court about nine seconds later. The Wildcats set their play and a three-point point attempt by Connor Abbott, who had made a pair of treys earlier, rimmed out and Calnan came down with the rebound with four second left.
Calnan then launched a last second three-point shot from about 35 feet away. He was fouled on the play and it was called as the senior went to the free throw line with three chances to get a point with no time left on the clock. Calnan made the first free throw as the Warriors prevailed.
“It was an exciting victory,” said Head Coach Brad Simpson. “We forced the tempo. The play was more helter skelter. We wanted to deny Bennett the ball. He did not have as many touches.”
Bennett, who scored 26 points in Wilmington’s 61-49 victory in the first meeting, had 18 points on Friday night.
Meanwhile, Calnan not only made a clutch shot and free throw, but he also had five rebounds, two steals, and two assists to go along with his 20 points.
The uptempo play resulted in some poor shooting by both teams. The Warriors shot 20-for-70 from the field for 28 percent and they shot 3-for-15 from behind the three-point arc. Also, Wakefield went 6-for-11 from the free throw line.
Wakefield also had 17 steals as a team, a season high, and it also forced 16 Wilmington turnovers. The Warriors had 17 turnovers themselves.
In addition to Calnan, senior guard Brian Dickey, still nursing a thumb and hip injury, scored just five points, but had a solid floor game to make up for the lack of scoring. Dickey had eight rebounds, six of them off the offensive glass. He had also four steals and three assists.
Andrew Auld, a junior, scored six points, had three rebounds, a steal, and an assist as he drew the assignment of guarding Bennett.
Zach Price, a sophomore, scored six points, had four rebounds, three steals, and one assist.
Senior MJ Urbano had four points and four steals.
Junior guard Corey Imbriano had four points, two steals, and a key assist on Calnan’s late jump shot.
Alex McKenna, a sophomore, scored three points and junior forward Tighe Beck netted one point.
Also coming off the bench for the Warriors were Jon Miller, Neil Fitzgerald, and Kobe Nadeau.
“All 11 kids played,” said Simpson. “Kobe Nadeau, Tighe Beck, Jon Miller, Neil Fitzgerald, who fill in admirably for Calnan late in the first half, and Alex McKenna all gave us quality time and were solid for us with the tempo.”
Wakefield led 13-6 after the first quarter and 26-16 at halftime. Wilmington outscored Wakefield 19-12 in the third quarter to make it a close game in the final. The Wildcats outscored the Warriors 13-11 in the fourth quarter, but Wakefield had just enough to win by a point.
“We’re 8-7 and need one more win to qualify for the state tournament,” said Simpson. “It was a very physical game and there was some good defense played by both teams. We got the call at the end of the game. We were a little lucky, but you also have to take advantage of that. Calnan is one our leaders and he made the free throw.
Wakefield takes on Melrose tomorrow night at 7 p.m. at Melrose Veterans Memorial Middle School Gymnasium.