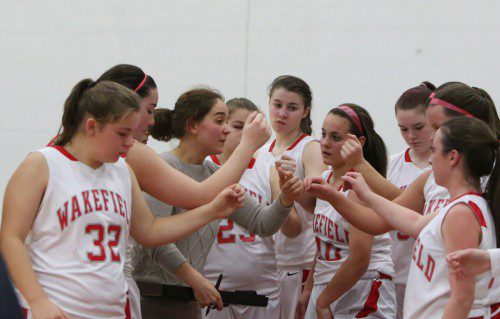 THE WARRIOR girls’ basketball team made the state tournament for the second straight year with victories over Wilmington and Concord-Carlisle over the weekend at the Charbonneau Field House. Wakefield is 10-5 on the season. (Donna Larsson File Photo)

WAKEFIELD — On New Year’s Eve 2014, Wakefield Memorial High School girls’ varsity girls’ basketball team claimed its third win of the season, third win in a row, and really showed how strong they can play in a 39-18 win in Concord-Carlisle.

On Sunday afternoon at the Charbonneau Field House, Wakefield played host to Concord-Carlisle looking to seal its bid for the MIAA state tournament with its 10th victory of the year.

The Warriors delivered for Head Coach Meghan O’Connell, scoring a 58-32 win over the Patriots, punching their ticket to the Big Dance. The win also came after a 55-43 triumph on Friday night against Wilmington at the Charbonneau Field House.

Wakefield increased its record to 10-5 overall and 8-5 in the Middlesex League Freedom division.

The Warriors clinched a state touranment berth for the second straight year and did so with five games to spare.

“It’s exciting,” said O’Connell after the game. “I’m happy for the kids, they work so hard.”

Amanda Boulter’s hot shooting from Friday evening carried over into Sunday, as the senior shooting guard had two three-pointers in the first quarter, including one just as time expired to cut the lead from 5-2. She had 4 more treys in the game Sunday and finished with 13 points.

“She’s a great shooter and she’s getting it done,” said coach O’Connell after the win.

Gabrielle Joly had the other two baskets in the first quarter for Wakefield. She finished with eight points on the day.

Wakefield did trail by two heading into the second quarter, but that’s just when the offense started to flow for the Warriors.

“We have to give Concord-Carlisle credit, they came out strong and nailed some shots,” said O’Connell. “We were turning the ball over and not making shots, the defense was a little bit lax, but we just regrouped.”

Wakefield scored 18 points while allowing just seven in the 2nd quarter to grab the lead going into the second half.

Grace Hurley had the first bucket of the second for the Warriors and sparked an 8-0 run to start the second quarter. Daniella Iannuzzi and Joly had the other baskets as Hurley had four points to bookend the run.

Concord-Carlisle scored a basket, but then Boulter hit her third trey of the day and sent the Warriors on a 7-0 run before the Patriots managed to score again.

Following the Boulter three, Emma Butler had a hook shot from the low-post go in off the glass and Joly had a layup for the last of her eight points.

Wakefield led 28-19 at halftime and came out rolling in the third quarter to effectively end this one as a contest.

Boulter’s fourth three-pointer got the second half going quickly, and then Jillian Raso and Iannuzzi followed with baskets to make it 35-19.

A timeout by the Patriots led to some aggressive play and a free-throw for Hannah Wolfahrt, but Wakefield responded by scoring the next eight points, starting with an Iannuzzi bucket. Hurley followed that up with a three-pointer, then Raso scored and Alyssa Rossino made 1-of-2 from the line and Wakefield started the third on a 15-1 run.

Colleen McGuinness scored the only field-goal for Concord-Carlisle in the third quarter as the Warriors held their opponent to just three points.

“The intensity on defense just got better,” said O’Connell referring to her team’s up-tempo defense in the third quarter. “Give credit to the defense they helped us get our offensive momentum.”

Scoring 15 points per quarter in the second half helped Wakefield to the win.

“The girls started to run and to knock down some shots. Our execution continues to get better,” said Coach O’Connell. “That’s what we want, to be executing at a high level.”

Wakefield’s execution was reaching its peak and the Warriors led 43-22 after three quarters.

The fourth quarter gave Wakefield chance to give some bench players some significant playing time.

The bench proved they are capable and reliable with a strong fourth quarter, outscoring Concord-Carlisle 15-10, sealing the win for the Warriors by a 58-32 final score.

Nicole Galli made the first basket for Wakefield after McGuinness scored for Concord-Carlisle to open the fourth.

Rossino had back to back baskets on consecutive possessions for the Warriors as Concord-Carlisle managed another two from the field.

Mia Joyce, Julia Fillipone, Mackenzie Collins, and Olivia Dziadyk had baskets in the fourth for the Warriors with Dziadyk’s points coming from beyond the arc.

“In this game you have to mention everybody, it was a total team win, every kid went out there and did their job tonight,” Coach O’Connell said in praise of her entire team. “There are always things to work on and get better at. “But I think our execution has continued to improve top to bottom.”

For Wakefield, Head Coach Meghan O’Connell was looking for a repeat of her team’s 64-55 win over the Wildcats on Jan. 9 in Wilmington.

She was pleased to see her team secure the win 55-43, which brought  the team one win away from qualifying for the MIAA state tournament.

“That’s a big win,” said the coach after the game.

Wakefield got off to a good start shooting the ball, outscoring Wilmington 19-14 in the first quarter.

Iannuzzi got the scoring started for the Warriors with a bucket down low. She had five of her nine points in the first quarter with three made free throw attempts.

After the Iannuzzi basket, Raso knocked down a three-pointer to give the Warriors a 5-0 lead.

For Wilmington, Amber Peach had a three-pointer and a layup and Christina Woods had a mid-range jumper go down along with going 2-for-2 from the free throw line for four of her seven points.

Wakefield struggled from the free throw line in the first quarter, shooting 3-for-11 while Wilmington made 5-for-8.

Iannuzzi made it 23-14 with a bucket on an offensive rebound and a put back on the following Wakefield possession.

The second quarter was called very tightly by the referees, resulting in 24 free throws being attempted by the two teams.

Wakefield shot 6-for-10 from the line, while Wilmington made just 5-for-14. Iannuzzi made four free throws in the quarter to go along with Rossino and Hurley who each had one.

Boulter had another three in the second and Joly had four points in the quarter, including the final basket of the half to send the Warriors into the locker room with a 36-21 lead.

“She’s an outstanding shooter and she showed it again tonight,” coach O’Connell said of her senior shooting guard.

After the break, Wakefield came out aggressively to start the third quarter. Galli got to the line on the first possession and sunk two free throws. The next trip down Hurley got fouled going to the hoop and made 1-for-2 from the stripe. Wakefield got a stop on defense and the next trip down Boulter hit her fifth three-pointer of the night, putting the Warriors ahead 42-21.

“One of the things we’ve been trying to work on is getting leads and trying to extend them,” Coach O’Connell said. “It was nice to see us come out and extend it to 20 right away to start the second half.”

Wilmington called timeout and got things reorganized, going on a 4-0 run out of the timeout highlighted by a Kalia Bavin three-pointer.

After Wilmington’s Bavin struck from long range, the Warriors closed the quarter on a 6-2 run.

Joly and Iannuzzi each went 2-for-2 from the free throw line and Galli had a bucket giving the Warriors a 48-27 lead after three quarters.

“It was an outstanding team effort,” said coach O’Connell. “Great offense starts with good defense, their hands were really active and that helped get things going. The defense held them to six, it was excellent.”

Wakefield let off a bit in the fourth and played some of the bench players The bench didn’t disappoint, putting in an all-hustle effort while leading by 20.

Wakefield had seven fourth quarter points, while allowing Wilmington to net 16 resulted in the final score being a little closer.

Julia Derendal had a basket and a free throw in the fourth for her three points.

Hannah Dziadyk had a mid-range jumper for her two points and Filippone went 2-for-2 in her only trip to the line.

For Wilmington, its captain Peach had nine of the team’s 16 points in the fourth, including a three-pointer. Bavin also added another three for the Wildcats.

Wakefield is scheduled to wrap-up the Middlesex League schedule this coming week with games against Belmont, Melrose, and Burlington. Today’s makeup against Belmont has been postponed and rescheduled for Thursday night at 5 p.m. at Belmont High School. The Warriors face Melrose tomorrow night at 5:30 p.m. at the Melrose Veterans Memorial Middle School Gymnasium. On Friday, Wakefield hosts Burlington at 5:30 p.m. at the Charbonneau Field House.