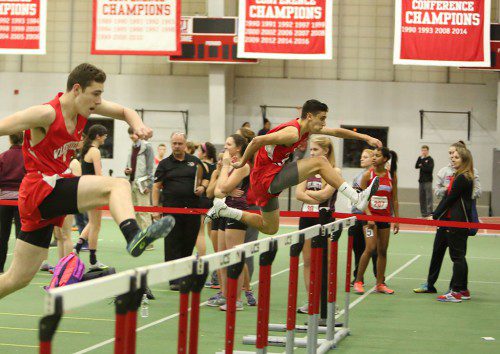 JUNIORS SAM Morey (left) and Jordan Fauci (right) posted a one-finish in the 55 meter hurdles. Fauci ran a time of 9.64 seconds, a PR by nearly a full second, for first place and Morey came in second at 9.76 seconds. (Donna Larsson Photo)

BOSTON — Before the boys’ indoor track season even started, the favorites in the Middlesex League Freedom division were the Wakefield Memorial High and Burlington High teams.

That has become reality as both teams are now 3-0 and will face each other in a showdown of M.L. Freedom division unbeaten squads next Tuesday that will most likely determined the league champion.

The Warriors did their part as they defeated Melrose by a 56.5-29.5 score in the third block of M.L. dual meets held on Tuesday at Boston University.

Meanwhile, the Red Devils defeated, 57-29, on Tuesday for their third win.

There were many fine performances by Wakefield throughout the 10 scoring events. Wakefield also swept three events.

In the 55 meter hurdles, Wakefield secured all nine points. Jordan Fauci, Sam Morey, and Brendan Coughlin, all juniors, took first, second, and third with times of 9.64 seconds, 9.76 seconds, and 9.86 seconds.

The shot put is the third event where the Warriors swept. Pat Redmond, a junior, won the event with a throw of 47-0. Cole Mottl, a senior captain, was second with a distance of 46-2. Joe Connell, a junior, was third with a heave of 38-7 1/2.

Marc Biennestin, a junior, came in second in the 55 meter dash in a time of 7.18 seconds.

In the mile, the Warriors came away with six points with a first and third place finish. Senior captains Adam Roberto and Ryan Sullivan clocked in at 4:38.68 and 4:49.41.

Wakefield won the 4×400 relay and recorded a time of 3:39.17. The four runners included Smith, Sullivan, Summers, and Roberto.

In the high jump, the Warriors had a second place finish and a tie for third. Biennestin cleared 5-7 for second, while senior Carmen Sorrentino tied a Melrose jumper as both cleared 5-5.

“Patrick Redmond had a breakout throw in the shot put. Jordan Fauci ran a PR by almost a full second and was first. Adam Roberto ran in first place from start to finish in the mile and ran a good time. Nick McGee ran a fast time in the 1000. Matt Greatorex ran a very fast time in the two mile, this early in the season,” said Coach Ruben Reinoso. “The biggest PR came from a freshman, who has never run the 600 meters before. Tanner Jellison ran a 1:29.50, which currently puts him number one in the whole state among freshmen. Athletes of the meet were Patrick Redmond, Tanner Jellison and Jordan Fauci. Now we get ready to compete against the undefeated Burlington team at BU next Tuesday.”

There were also good efforts by the non-scoring athletes in the meet.

Senior Peter Crump clocked in at 10.35 seconds in the hurdles.

Tom Galvin, a sophomore, cleared 5-1 in the high jump.

In the long jump, Crump had a distance of 15-4, while Obear fouled on all three of his attempts.

The Warriors and Red Devils run against each other on Tuesday, Jan. 10 at 4:30 p.m. at Boston University.