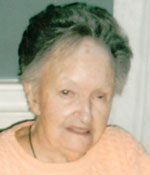 WAKEFIELD — Marguerite C. (McNulty) Buckless, a 58 year resident of Wakefield and formerly of Stoneham, entered into eternal life on Tuesday, January 3, at Sea View Retreat in Rowley following an extended illness. She was 95 years old.

Marguerite was born in Wakefield on September 24, 1921, a daughter of the late William McNulty and Helen (Morgan) McNulty. She grew up in Stoneham where she was educated in the Stoneham Public School system and graduated from Stoneham High School.

Marguerite was the beloved wife of the late Raymond P. Buckless. She was the devoted mother of Beverly Boothby of Westbrook, Maine, Carolyn Horgan and her husband Dennis of Wakefield, Lawrence Buckless and his wife Paula of Rowley, Gustavo Rodriquez of Berkeley, California and the late Paul Buckless. She is the loving Nana to Haley Rello and her husband Justin, Dayna Horgan, Todd Buckless, Scott Buckless and her great-grandchildren Finley Rello and Riley Rello. She was the beloved sister of William McNulty Jr. (retired Stoneham Police Officer) of Stoneham and the late Kay Skow and Dorothy Carboneau. She was also lovingly survived by several nieces and nephews.