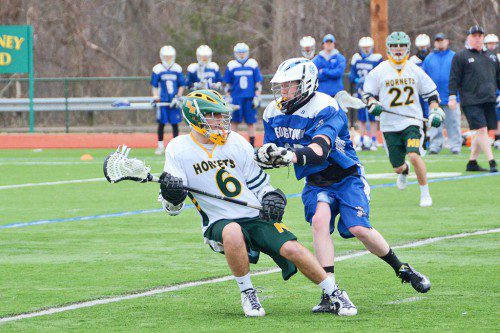 NORTH READING — The NRHS varsity boys lacrosse team opened their Cape Ann League schedule on April 7 with a dominant 11–3 victory over the visiting Georgetown Royals. Junior Nick Day was superb with 4 goals and one assist. Junior Brad Lumb had a 4 point afternoon with 2 goals and 2 assists. Senior Sean McGreal and junior Nate Distasio both chipped in with one goal and 2 assists.

It was a very competitive first quarter with both teams scoring twice and the scroe was knotted 2–2 after one. North Reading turned up the defense and shut out the Royals in the second quarter. The Hornets added two goals and took a 4–2 halftime lead.

North Reading put the game away in the third quarter. They outscored Georgetown 5-1 in the quarter and headed to the fourth with a commanding 9-3 lead. The Hornets scored twice in the final quarter to cruise to the 11-3 victory.

Win tight one over Generals, 6-4

North Reading battled past the Hamilton–Wenham Generals 6–4 in their matchup under the lights at Arthur J. Kenney Field on Thursday night. Sean McGreal led the way with 3 goals and 1 assist and Nate Distasio added 2 goals. Junior captain Nick Ponte continued his great play in net with 13 saves.

It was a defensive battle in the first half. The Hornets only scored twice and took a slim 2–1 lead into the half. North Reading doubled their lead in the third and went up 4–2 after three. Both teams added two goals in the fourth and the Hornets went on to the two goal victory.