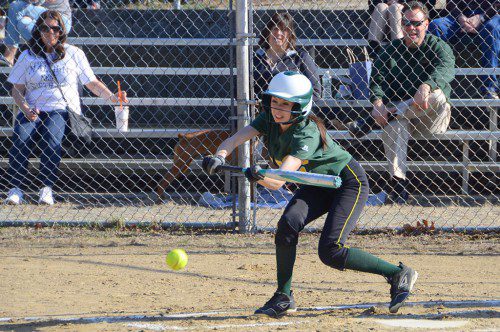 NORTH READING — The NRHS Girls varsity softball team opened their season somewhat  belatedly on Monday, with a 2–0 loss on to the Malden Golden Tornadoes on a sunny  and warm spring afternoon at the Little School.

In the top of the sixth, with Hornet sophomore Julia Perrone pitching, Malden succeeded in pushing a couple of runs across the plate thanks to a lucky bloop infield hit  with bases loaded followed by a long sacrifice fly to right field that plated another run.

The Hornets’ best chance to score probably came in the bottom of the sixth, when junior Carly Swartz doubled to lead off and advanced to third base on a ground out.  Following a walk and a stolen base, the Hornets had runners on second and third but failed to score.

There are four juniors, including Swartz, Lily Malloy, Connor and Sarah Sabella. The sophomores are Gaeta, Perrone and Nicole Shedd and the team has four freshmen: Margaret McCarthy, Tara Driver, Abigail Paine and Guiliana Peppe.

The girls will go at it again on Thursday, April 16, when they take on the Newburyport Clippers, again at the Little School field at 3:45 p.m.