Warriors hold on for 16-10 triumph in Div. 2 North Quarterfinal contest 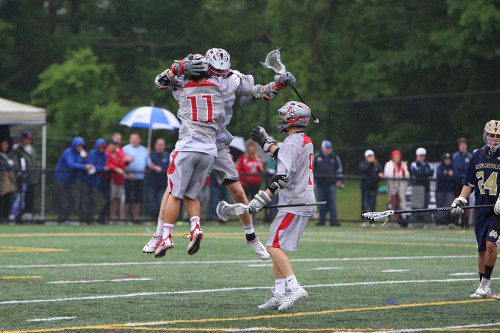 BRANDON GRINNELL, a senior (#11), celebrates with one of his teammates as Pat Leary (#9) looks on. Grinnell scored five goals and had three assists, while Leary had one goal and three assists in Wakefield’s 16-10 triumph over Malden Catholic in a Div. 2 North quarterfinal game yesterday at Landrigan Field. (Donna Larsson Photo)

WAKEFIELD — With the rain coming down intermittently on Landrigan Field Sunday at noontime, the Wakefield Memorial High School boys’ lacrosse team had more than just raindrops to dodge in a Div. 2 North quarterfinal game against Malden Catholic.

Malden Catholic’s fourth quarter comeback effort fell short and the Warriors were able to stave off a rampaging Lancers’ attack for a 16-10 victory to move on in the Div.2 North Tournament and increase their record to 17-2.

Wakefield will play Winchester in a Div. 2 North semifinal tournament game tomorrow night at 5 p.m. at Knowlton Stadium at the McCall Middle School in Winchester.

“We played three really good quarters and one really bad quarter and that was at the very end,” Head Coach Andrew Lavalle said after the win. “The three great quarters were a good team game, the one bad quarter we weren’t really playing as a team. We’re all about we, not about me, and we had a lot of guys out there sharing the rock today.

“Our transition game was tight, we just have to do a better job finishing up the game. We have to stay up for games and for that game we didn’t stay up the entire time unfortunately,” added Lavalle.

The Lancers had the upper hand early on, as they jumped ahead to a 2-1 lead midway through the first quarter but the Warriors nabbed three goals to close out the opening quarter with a 4-2 lead.

Wakefield built on its lead in the second half and led 14-6 after three. PJ Iannuzzi got things going with an early goal in the third, then he made it two halfway through the quarter.

Bobby Keegan came on in attack and made the most of his moment, scoring a highlight goal running across the field.

On Keegan Lavalle said, “Bobby Keegan got in there and made the most of his rep. We gave him a shot on the dodge, he got that ball, went in hard and ripped one top dog. So it’s always nice to have role players step up and make big plays,

With under two minutes to play, the Warriors scored three goals in 50 seconds and made things very difficult for MC.

At the start of the final quarter, the game was well in the Warriors’ hands. Collard scored within the first minute to bring the lead to 15-6 for the Warriors.

At this point, the attack dried up for the Warriors as MC found itself one quarter from their season being over. Over the next six minutes the Lancers scored three times to cut the lead down from nine goals to six at 15-9.

At the four minute mark, Grinnell finished the scoring after receiving a no-look pass and putting the ball past the goalie.

MC managed one more goal against Ryan Chambers, who had a magnificent game with 12 saves.

In the end the Warriors did enough to move on to the next round. On Tuesday they’ll face off with one of the teams to beat them this year, as they head to Winchester to face the Sachems at 5 p.m. Winchester beat Wakefield, 10-8, in the regular season meeting.

“If you show up for three you aren’t going to beat the best team, Tuesday we gotta play four quarters,” Lavalle said looking ahead to Winchester. “If we play like we did in that last quarter we can count our season over.”