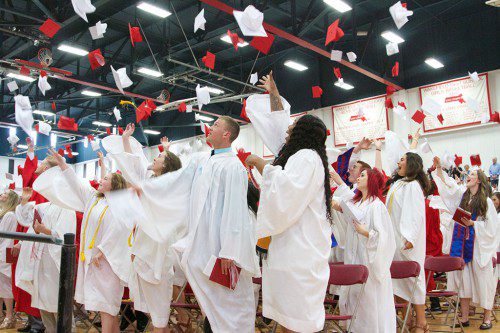 WITH THEIR HIGH SCHOOL careers officially behind them, members of the Wakefield Memorial High School’s Class of 2016 do a little celebrating during Saturday’s commencement exercise. More photos appear throughout today’s edition of the Daily Item. (Donna Larsson Photo)

WAKEFIELD — The Class of 2016 bid farewell to Wakefield Memorial High during graduation exercises Saturday, with speakers singing the praises of class members for accomplishments big and small.

Possibly the biggest highlight came when John Cerretani was given an honorary diploma. John left school 72 years ago to fight in World War II. When he returned home, he went right into the supermarket business, never having the time to finish high school.

He said, “Today we have an opportunity to honor a former member of the community of Wakefield and attendee of Wakefield Memorial High School. Mr. John A Cerratani was of high school age in the late 1930s and early 1940s. Unfortunately, Mr. Cerratani was not able to complete his education at the high school level. During that time, he helped to support his family’s business, Richardson’s Market, which became Cerratani’s market in Melrose, while four of his brothers went off to war. When Mr. Cerratani turned 18, he was also drafted to serve his country in World War II. When he returned, completing his education was not an option as he began to start a life and family of his own. Although he was not able to graduate from Wakefield, his life, starting as a young man, has been a representation of the core values of family and service this community holds so dear. It is my honor to confer upon him this honorary diploma on behalf of Wakefield Memorial High School for his commitment to his family, community, and service to the United States of America.”

Speaking to the 251 other graduates in the Class of 2016, Class President Shannon Fairweather said, “Our high school journey together may end here today, but that does not mean that our connection as a class will ever end. Because we will always be connected to one another, we will always proudly be Wakefield Memorial High School’s Class of 2016 – and what an awesome class we are, a united class that accomplished great things together:

• The class that made a Senior Movie in one week;

• The class that created The Red Sea Tailgate;

• The class that had a Flash Mob during lunch

• The first class to have a Senior Comedy Night

“We truly are a memorable class.  From artists and athletes to scholars and punk rockers our class simply has it all. Together as a grade we have truly made our mark – from our basketball team who inspired the greatest Red Sea I’ve ever experienced, to our amazing student run organizations, our grade has accomplished many great things. It is remarkable how committed our class is to making our school, our town and our world a better place.

“We are a class of doing more, doing good and changing things for the better. But we have only just begun!”

Class Salutatorian Akash Altman said, “I really think there’s something to be said not just for a liberal arts education, which a lot of us are headed for, but for a liberal arts lifestyle as well. We have learned a lot in high school about making choices — and I don’t just mean on exams or course selection sheets. We make choices a lot more than you may think. For example, I bet you had an opinion on the proper color of the gowns at this very ceremony. The decision that ensued was not one of the original options — we as a class blazed a new path. It is in this spirit that I encourage all of you to take a perspective on life that encourages self-determination rather than conformity. There are many ideas in the heads of the graduates in front of me today — so many possibilities just waiting to take shape. We are always told to follow our dreams, but the road to that goal is not often a straight and clear one. We hit forks in the road. Don’t just settle for what’s in front of you. Redefine the possible — express your individuality in the choices you make. Don’t just take the road less traveled — pave a new one.”

Class Valedictorian Jessica Dubuque said, “Some people say you should never look back, but I don’t see things that way. Our experiences, both the good and the bad, are what shape us into the people we become. I see no fault in taking time to reminisce. It’s easy to get caught up in the prospects of the future, but we must not get so distracted by ambition that we forget to appreciate how far we’ve already come. The only way to preserve a memory is to think about it fondly every once in awhile; that is how you keep things from slipping away.

“But as with all things in life, we must strike a balance. We can only have so much reflection without getting stuck in the past. Because whatever the future may hold for each of us, there are new memories to be made. And although these new memories may be quite different from those we have made in our time as Wakefield Warriors, I believe they will be just as wonderful.”