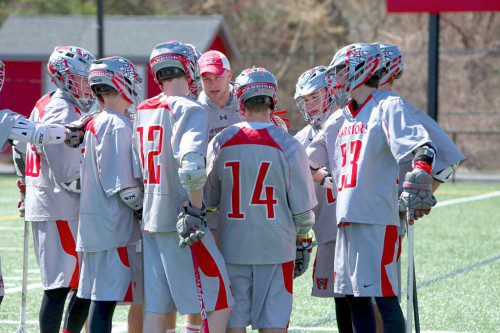 THE WMHS boys’ lacrosse team posted a 15-5 record and captured the Middlesex League Freedom division title a year ago. The Warriors are hoping to have another strong spring campaign in 2016. (Donna Larsson File Photo)

WAKEFIELD — It’s been a year since the whistles blew at Landrigan Field in a lacrosse game but that’s about to change today as the Wakefield Memorial High School varsity boys’ team starts off its season with a visit from Austin Prep.

“Honestly, I’m not going to be able to sleep tonight (Thursday), it’s like Christmas morning,” he said in an interview on the eve of the inaugural game. “It seems like this week flew by because I knew it was game week. It’s Christmas Eve tonight and I’ve never been more excited for the start of a season in my life. I just can’t wait.”

There is good reason for Coach Lavalle’s excitement as he returns to the helm of the reigning Middlesex League Freedom division champion for his second season. His team is looking to build on a 15-5 record from a year ago but Coach Lavalle knows it takes hyper-focus on every detail to continue to grow as a program.

“We want to be the best at passing, the best at shooting, dodging, (and) ground balls. It seems like a cliché but it’s easier said than done,” Lavalle said. “We want to put together max effort for four quarters more than anything else. The plan for this year is to play an intense game, to play four quarters of lacrosse.”

“I tell the guys every day that I want to lead the league in effort,” added Lavalle. “I want guys going as hard as they possibly can whenever they can. We preach that it’s OK to make a mistake, as long as it’s full speed. We want full speed mistakes.”

He probably won’t be seeing too many mistakes as the team boasts some strong senior leadership.

“We have some great senior leadership,” the coach said. “We have four senior captains, Brandon Grinnell, Steve Marino, Ben Yandell and Andrew DeLeary. Those guys are great captains and great guys to be around.”

Gourville is mired in the depths of a battle to replace last year’s great goalie Alex Flynn. Coach Lavalle spent a minute giving credit to the man charged with grooming Flynn’s replacement.

“We have a great goalie coach,” Lavalle said. “The defensive coach, Coach (Dough) Gallant, he’s very into working with goalies.”

On Gallant, Lavalle said, “We’re really grateful to have him coming back this year at Wakefield High.”

Lavalle talked about the battle for time in net as it could play out this year saying, “It’s great to have two guys ready to step up for us. Senior goalie Evan Gourville looks awesome and sophomore Ryan Chambers looks great too.”

When asked who’ll get the nod tomorrow, Coach Lavalle revealed, “It was right up to a game day decision for us but we decided to go with Ryan Chambers, the younger guy.”

It was an easier decision to figure out who is going to play up front in attack, as senior captain Yandell will be joined by three year starter Pat Leary and captain and league all-star Grinnell.

There is a solid mix of veteran and players in the Warriors’ midfield as they try to replace the likes of James McAuliffe and MJ Urbano.

PJ Iannuzzi and Austin Collard will see a lot of field time for the Warriors.

“PJ has been working more for us on the offensive side of the ball,” Lavalle said. “He was used in the defensive side but has developed as an all-around player.”

Then there is Dylan Frank and Bobby Keegan who will come in and look to provide energy off the bench in the midfield.

Friday’s game will see the team start to figure out its defense as Buckley and Marino lead the long stick players on the field.

Coach Lavalle spoke about some of the other guys who’ll step out in defense for the Warriors.

“Ryan Fitzpatrick is a great sophomore defender, Ty Collins is a great junior defender. You have to get used to the speed of the game. These guys were with us last year and this year they’ve stepped on the field and are ready to make a difference for us.

“It’s nice to be able to rely on some young guys and some more senior players put together in conjunction with one another and put together a full on game plan. We have a lot of guys stepping up, this is a very exciting year for us,” continued Lavalle.  “It seems like this year we’ve been able to put what I’ve been saying on the field. I’ve seen guys going full speed all the time and that’s going to make this a very dangerous team.”

With field condition conducive to rigorous preparation, one can expect the Warriors to hit the ground running come Friday afternoon when the season begins against Austin Prep. Game time is at 4 p.m. at Landrigan Field.

They’ll have a couple tune up games before the grueling Middlesex League schedule begins. The Warriors will no doubt be in some heated competitions with the likes of Arlington, Belmont, Burlington, Lexington, Melrose, Reading, Stoneham, Wilmington, Winchester, Woburn and Watertown. For non-league games, they’ll face Austin Prep and Malden Catholic at the beginning of the year, then they’ll take on Salem, Newburyport and Danvers before finishing up with Marblehead and Chelmsford.

For the fans of Wakefield Warriors lacrosse, Coach Lavalle and the 2016 Warrior boys’ lacrosse team should provide plenty of reasons to cheer up the hill at Landrigan Field.