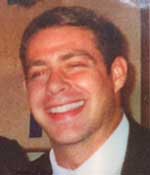 Born in Malden, he was the son of Elaine (Statho) Zani of Wakefield and the late Edward Zani.

Edward was a graduate of Wakefield Memorial High School. He also completed a school of massage therapy and received an associate degree in Culinary Arts. He was self-employed.

Edward enjoyed the theater and music. He sang in barbershop quartets and volunteered at the Stoneham Theatre.

A funeral service will be held at Anderson-Bryant Funeral Home, 4 Common St., Stoneham on Monday, April 4, at 11 a.m.