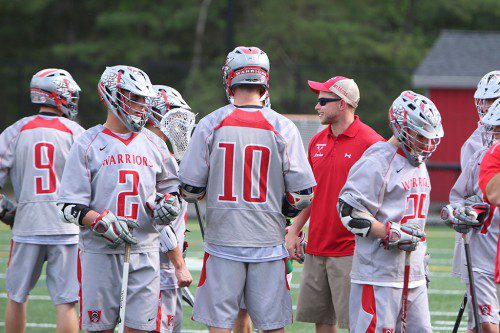 WAKEFIELD — The 2016 varsity boys’ lacrosse team’s regular season concluded on Wednesday as the Wakefield Warriors played host to the Arlington High School Spy Ponders in a game that had significant meaning to the home team.

A flawless performance saw the Warriors put the visitors away by a 19-3 final score at Landrigan Field. With the win, the Warriors clinched their best ever record with 16 wins and claimed the Middlesex League Freedom division championship for the second straight year.

Yesterday’s win comes on the heels of a close, low scoring affair against Chelmsford on Monday which saw the Warriors come out on top by a 5-3 final score at Chelmsford High School.

Wakefield ended the regular season with a 16-2 overall record and 9-2 record in the league.

A soaking wet Andrew Lavalle spoke about the win after his team doused him with the water bucket.

As for the Arlington victory, Lavalle was pleased with the overall play.

“(The) Defense looked good, offense looked good, seniors we’re great, young guys were great, everybody looked good and that was the key to this victory, a lot of guys playing well,” said Lavalle. “We’ve been saying this year that we need to engineer our own success, the idea is that we can’t wait for other teams to make mistakes to capitalize on, we have to go make the plays, it’s up to us and not up to anyone else.

“We had everybody helping each other out, guys making the right looks, a lot of stuff that we focused on in practice yesterday was the stuff that came to fruition today. We saw it on the field, when you do the right thing, success will follow,” the coach added.

Just a couple minutes into the first quarter, the Warriors got the scoring going with senior Brandon Grinnell notching the first of four goals on the day. A minute later, Austin Collard doubled the lead making it 2-0 with nine minutes to go in the first.

Grinnell made it 3-0, before Andrew DeLeary netted for the first of 4 times and with under 10 seconds to go, Ben Yandell put another goal on the board and made it 5-1 after the first quarter.

“That’s the type of offense I love,” the coach said about his team’s potent attack. “We try to preach a ‘we not me’ mentality. You could see that today, only one goal was unassisted.”

With the second quarter underway, the Warriors got some help from another senior, defenseman Steve Marino, whose expanded role as the face-off guy has given his invaluable skills another facet to his game. Marino had another outstanding game taking the face-offs for the Warriors, as it seemed like every time there was a draw, Wakefield came out with possession.

Wakefield got second quarter goals from Grinnell, PJ Iannuzzi and Pat Leary to give the Warriors an 8-3 halftime lead.

DeLeary led the way for the Warriors in the third as he scored 3 goals in row and effectively ending the game as Arlington had no answer for Wakefield’s attack.

The Warriors got four goals from DeLeary and Grinnell, three goals from Yandell and Iannuzzi, two goals from Leary and Collard and a solo goal from Bobby Keegan for the 19 they put up against the Spy Ponders.

They would add three more goals in the fourth before calling a halt on the attempts on goal and just brought the clock to triple zero.

“Guys played smart at the end of the game, killing the clock,” Lavalle mentioned as his team reached their scoring quota for the game.

With the win, the Warriors now await the draw of the playoff seeding which will take place on Friday, then they will know their fate as to what school they’ll be facing in their first state tournament game. The first tourney game could start as early as Tuesday, May 31.

“We wanted to finish strong. Sixteen wins is the most in a regular season in Wakefield (Memorial High) history. It’s nice to be part of that, it’s not just one guy doing it, we all bought in and believed in each other,” Lavalle said.