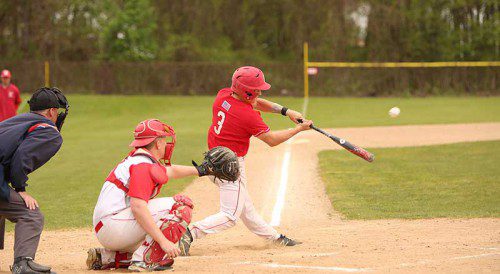 MELROSE — The Melrose Red Raider baseball team became one of the 5 MHS varsity teams who will see a post season thanks to a end-of-season winning streak that lifted them to a 14-6 record and a ticket into the Div. 2 North playoffs.

Melrose pitchers have come through for Bill Hirschfeld’s Red Raiders, winners of five straight behind the pitching of Justin McCarthy, Cam Markt, Evan Darwin and Billy Kaliris. They also saw solid pitching behind the arm of John Casperiello in a recent outing against Wakefield, in which he gave up just four hits.

“Our pitching has really come through for us this year,” says Hirschfeld, whose team enjoyed back-to-back wins over Stoneham on Thursday, May 19 and Friday, May 20, winning both contests 8-1 and 7-3 with hurlers Evan Darwin (4 hitter with 4 Ks) and Justin McCarthy taking the wins respectively.

On Monday at Morelli Field it was senior Billy Kaliris’ turn for victory, and he tossed a  7-0 shutout giving up 8 hits and no walks. Red Raider Nick Cordeau hit a two run, out-of-park homer in third to open the game for Melrose.  Cordeau is hitting an eye-popping .460 in batting with three homers under his belt. “He’s been outstanding all season and is a great leader,” confirms his coach.

The Raiders were also aided by some impressive defensive work from players such as Ryan Censullo at short, Steven Guttadauro in right, Alec Tauro at first and Max Watson at third, who collectively helped Melrose get out of several jams on Monday. Guttadauro made the defensive play of the game in the fourth inning when he saved Kaliris’ shutout with a rocket throw from right field that took out a Warrior runner at the plate thanks to a clutch tag by catcher Justin McCarthy, which ended the Warrior scoring threat.

Wayland found first at the start of the game thanks to a Melrose infield error but a double play made by Red Raider Ryan Censullo ended the threat. At Melrose’s first at bat Cordeau hit a double to left and he later scored on a Censullo fielders’ choice, giving Melrose a 1-0 lead they held until the third, when Cordeau hit his homer over the left field fence, scoring Steve Guttadauro and giving Melrose a 3-0 lead.

Wayland threatened in the sixth with bases loaded, but shortstop Censullo threw home to secure one out. One batter later Red Raider Max Watson prompted an impressive double play, firing to McCarthy at the plate for one out, and McCarthy connected with Alec Tauro at first for a double play that ended the inning, and preserved Kaliris’ shutout. Melrose offense piled on the runs in the sixth with Cal MacDonald hitting a sac fly to score Censullo, Alec Tauro reaching on a double and later scoring from a Justin McCarthy double, making it a 5-0 game. A pass ball scored Max Watson and soon Justin McCarthy crossed the plate to make it a 7-0 final.

Melrose made it five in a row on Tuesday when they beat Malden 14-4 during Mayors Cup action at Pine Banks. Alec Tauro went 4-5, just a homeroom shy of hitting the cycle, and Nick Cordeau went 3-5. Hurler Cam Markt got the win.

Hirschfeld notes the team’s solid play overall at the final stretch of the season. “Our pitching has been very good, they’ve stepped up for us and our defense is getting the job done, the bats are hot. We’re looking forward to playoffs,” Hirschfeld said.

The MIAA will release the Div. 2 North bracket on Tuesday, May 31. At 14-6 Melrose is expected to be somewhere within the top 10 of the Div. 2 North, with Wakefield (17-2) poised to earn the top seeding and other contenders such as Danvers (14-2) and North Andover (14-2) proving tough competition. However, Melrose is firing on all cylinders in recent outings and could be a dark horse. Stay tuned.

(Fans are encouraged to visit www.miaa.net for up to date tournament information).