Boys soccer only 3 points away from state tournament 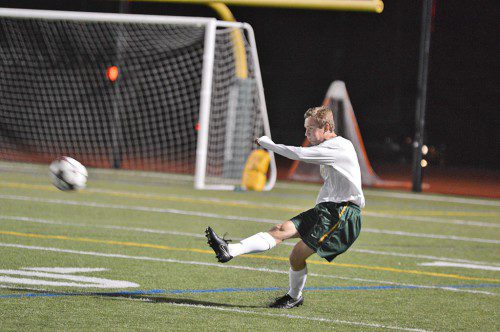 SENIOR MIKE DRISCOLL makes sure the ball doesn’t get anywhere near the net in this recent game at the Kenney Turf Field. (Bob Turosz Photo)

NORTH READING — The Hornets suffered their most lopsided defeat of the season falling to the CAL Kinney Division leading Masconomet Chieftains 5-1 on October 13. Junior Cam Davis scored the lone goal for North Reading.

The Chieftains blitzed the Hornets with three goals in the opening 15 minutes and raced out to a commanding 3–0 lead. From that point the game settled down and senior Sean Castro and junior Anthony Tramontozzi had good chances to score. Unfortunately their shots were sent wide. Masco added another goal and took a 4-0 lead into the half.

Early in second half, Davis cut the lead to 4–1 with his goal in the 43rd minute off of a superb cross from senior captain Kilian Daly. North Reading continued to press for more goals, but couldn’t get any closer. The Chieftains added their fifth goal in the 73rd minute and coasted to victory.

The Hornets got back on track with a 2–1 road victory over the host Newburyport Clippers on Thursday afternoon. Cam Davis scored both goals and now leads the team with 10.

Early on North Reading controlled the majority of the possession and created two great scoring opportunities. But both chances didn’t result in goals and Newburyport got on the board first in the 26th minute.

The goal didn’t faze the Hornets and they responded. In the 34th minute junior Patrick Davis won the ball at midfield and quickly sent it to Daly. Daly turned and played the ball through to a streaking Cam Davis who snuck the ball under the on rushing goalkeeper for the tying score.

North Reading came out firing in the second half and in the 47th minute they took the lead. On the play Daly fought off a defender and played a low cross to the near post and Cam Davis finished it off with a full volley into the net. Solid defense by senior Michael Driscoll and Patrick Davis and key saves by senior goalkeeper Billy Brandano down the stretch preserved the victory.